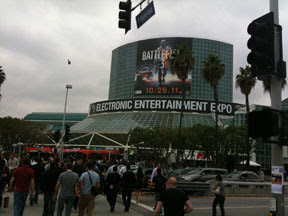 In case you don’t know what's an "E3", let me inform you. That’s the big Electronic Entertainment Expo (aka, annual video game show) going on in downtown L.A. this week.
My wife was with me so it was a little awkward since it seemed as if about 4% of the attendees were woman, and about 2% of those women were so-called “booth babes” Translation – chicks dressed up in crazy costumes. So I heard a whole lot of, “what the heck is she wearing?” and, “I can literally see that woman’s butt cheeks.”

Of course I had to confirm. A few times.

This isn’t my first visit to this expo. Actually my first was way back in 1995 and it’s a little disappointing seeing that the vast majority of games still being featured are hard-core FPS “shoot them up’s” with zombie’s, rogue soldiers from the future, and chicks with augmented everything – obviously from selective radiation.
Very few games for families and the rest of the world on Facebook, iPhone, and iPad.

Anyhow, some things I came across: 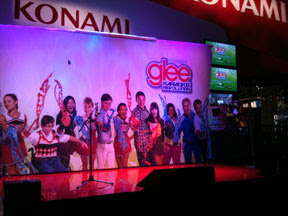 I use to watch that TV series "Glee" (yeah, I know judge me...) but I don't anymore because the show just went downhill this year. The character "Coach BEAST" was making an appearance to say hello and maybe do a little dance number. Unfortunately I missed it because there were food trucks outside. 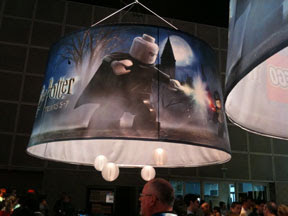 I'm a big fan of the Harry Potter series and I'm currently playing Lego Harry Potter years 1-4 on the iPad, which is a MUST if you have an iPad. I was thrilled to see years 4-7 coming out. No mention of when it'll be released on iPad/iPhone. 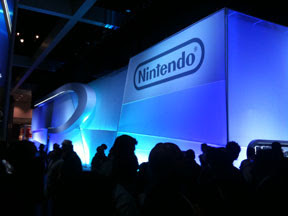 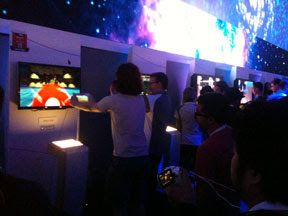 Nintendo just announced something called a Wii-U, which was basically larger than an iPod Touch, not as big as an iPad, but connected to the TV, but it's going to be $250, and you can't use it away from the TV or it'll get angry and explode and then you'll have to spend another $250. But the most important takeaway was that the games weren't at all impressive. In fact, I had no idea why they put a screen on the little Wii-U when you're obviously looking at the TV.
I waited in line for a Wii years ago (refer to my post of "Being up at 5AM isn't what it used to be.") but it's evident I won't be waiting in line for this thing. 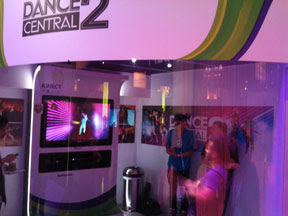 XBox Kinect is something I've heard a lot about, but have never actually seen or had interaction with. I've been avoiding it on purpose because quite honestly, I hate Microsoft. If they were a person, they would be Kevin Costner in Robin Hood (Worse. Movie. EVER.) But my mind has now somewhat changed. This Kinect business is pretty amazing! It literally does a pretty good job of tracking every single movement you do - and it shows your bad self on a little window in Airport Screener X-ray format. In a way, it was both creepy and playfully satisfying. I think we may end up getting one and I may end up getting a TSA costume too! 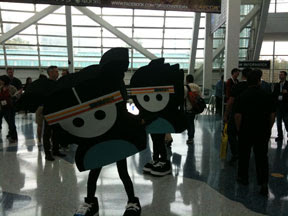 I have no idea what these things were running around in the entrance or what they were promoting. But would you believe me if I told you their butt cheeks were showing?
Posted by Creative-Type Dad at 11:30 PM 5 comments:

The Elvis Impersonator at My Son’s 1st Birthday Party 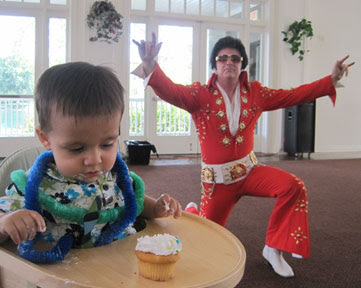 About 5 year’s ago, I wondered if my crazy vision of the ultimate 1st birthday party went a little too far when I hired an Elvis impersonator for my daughter’s 1st birthday party.
When I initially mentioned it to my wife she thought I went completely crazy – something I found ironic since she’s a huge Lionel Richie fan.

Nevertheless to my, and her, amazement Elvis was a huge success. Not only did the parents have fun, but the kids found him extremely entertaining too. They danced around, sang, and were all doing those weird Kung-Fu poses along with him.

It was pretty spectacular.

When the show was over and the guests were leaving, I distinctly remember telling myself, smiling proudly with my arms crossed, “Tony, you done good. Real good. Elvis is MUCH better than a clown, magician, or Bruce Lee impersonator any day.”

Fast forward to about a month ago when my wife asked me if I was going to call the same Elvis impersonator for our son’s 1st birthday party. I wondered – is this now a family tradition that every child from this time forward, generations ahead, should have Elvis at their 1st birthday?

I should hope so.

Last weekend Elvis came, Kunged-Fu’d, and raised the hypothetical roof once again. It was all even more spectacular the second time around.
Then when the show was over and all the guests were leaving, I smiled proudly with my arms crossed and began to tell myself one more time, “Tony, you done good…” the wife interrupted with, “do you think they have Lionel Richie impersonators?”

I hope not. Because that’s COMPLETELY crazy! 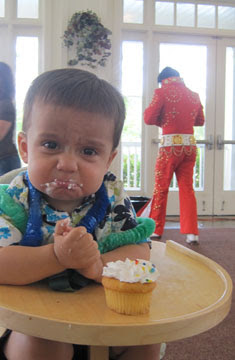 "Don't worry little buddy, Daddy will make sure this is a Lionel Richie free zone..."
Posted by Creative-Type Dad at 11:30 PM 11 comments: