Home Brewing Beer, Just Like a Cave Man or a Kennedy 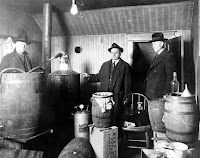 I subscribe to something called the Box of Awesome by Bespoke Post geared to a broad range of guys – not just the millennial ones. It’s definitely not your typical subscription box where they make you pay and you don’t know what’s inside. Bespoke Post actually sends you an email (actually several emails just to make sure) at the first of the month with all of the box details and you can opt to receive it or pass on it.

Boxes are $45, include shipping, and are really fascinating and completely random finds. Over the last year I’ve purchased 3 boxes and have found them to be pretty good deals as I’ve Googled info on the products.

So when I got an email for the March new find, the box theme called BREW had me intrigued. It’s basically a custom-made ‘Brewcraft’ one-gallon homebrew kit that makes 2 varietals, Blonde and Amber Ale. Each gallon makes about 10 bottles of beer. 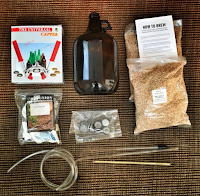 Some background with beer and me: I grew up in a Miller/Coors/Bud type of family and absolutely find those beers nauseating. So much that I pretty much stayed away from beers until I traveled to Europe and discovered Belgium beers, then later craft breweries out here in California namely San Diego’s Stone, Central Coast Figueroa Mountain, North Coast Brewing among others.  I’ve since become a fan.

Which led me to the type of people you come across at those places – home brewers. Talk to one for about 15 minutes and it’s hard not to be a little interested in trying home brewing. Products I’ve casually come across are usually the lower-end Mr. Beer Kits with plastic everything – like a 1950’s kit teaching The Beaver how to make beer in the garage. Those kits look like toys more than anything.

This Bespoke Post box pretty much came with mostly everything except the bottles. Oh well, I guess I’ll have to drink 10 bottles and wash/sanitize them out! I can see why they didn’t include them as shipping and boxing those would have been crazy.
But everything else was ‘mostly’ there – the glass jug is of good quality as is the bottle-capper.

The only major drawbacks, I’m putting details in here in case other receivers of the box are confused:


Overall, it took some outside research not included in the so-called 'detailed instructions' to really understand the process. The Brew time was about 3.5 hours mostly waiting and now My “Wort” is sitting in the glass jug (“fermenter”) in a dark downstairs closet for 2 weeks until I have to move on to the bottling process. To be perfectly honest, I’m unsure if I even did the brewing correctly. Maybe instead I made my grandfather’s hooch he use to make in an unsanitized bathtub in Louisiana. I guess I’ll find out soon enough!

But one thing I did find out even if this batch is a bust. The kit came with another recipe batch of supplies to try again. Not a bad move on Bespoke Post’s part. And I found a place online called Northern Brewer that sells 1-gallon recipe kits that work with my jug and maybe some equipment from the Bespoke Post BREW Box. Between them and Amazon, I think I may upgrade some of the pieces.

Who knows, I may be a home bootlegger by Christmas.