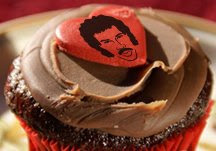 I just read today that the average man spends $350 on Valentine's gifts. Yet, I know of no man spending $350. I’m not saying that no man has ever spent $350, Fabio or a Jonas brother maybe, but the rest of us - no.
Of course that $350 figure is coming from a well-known women’s magazine giving us men some suggestions: Jewelry (not the kind from a vending machine.) Winery vintage reserve club (pay to get on a waiting list shows ‘true love’), wardrobe makeover ($3,800), spa weekend package without significant other (minimum $1,200.)

If cupid and his brother Hallmark were alive today, I’m sure they would both be very disappointed of how superficial we’ve become since they created Valentines Day over 2,700 years ago.

So in keeping with the original spirit of the day, I’d like to do my part to help out. Here are some Valentine ideas that aren’t expensive; instead they’re creative, useful, offbeat, simple and... cheap.

Not your typical mainstream coupons like “let’s go on a picnic in Rome this weekend” or “Good for one million dollars.” These coupons will actually change the way you live. Forever.
Click to print 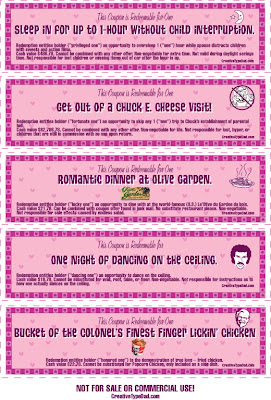 And for those ultra romantics I present the ultimate Valentine gift: a paper craft of Lionel Richie holding a flower bouquet. And If you really want to take it to the next level, use him as a finger puppet and make him sing “Hello” to your Valentine while they sculpt your head out of clay.
Click to print 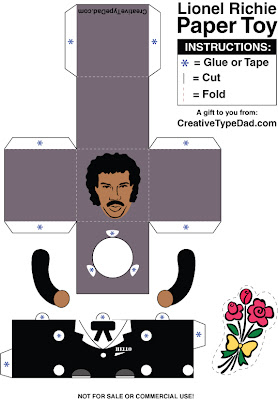 How To Get Rid of Annoying Cartoon Characters

I didn’t think much of it when they tied the Puppy to a string, hoisted him up about 4 feet, and gave the nearby 2-year old a baseball bat.

No, it wasn’t until the other kids and adults, including an old grandmother in a wheelchair, circled around her with their arms in the air and started yelling things like “Come on, honey! WHACK that Puppy real good!!”, “Hit that Puppy hard right between his eyes!!”, “Aim for his neck! Aim for his neck!!” as if witnessing a death match of a known violent criminal.

The 2-year old stood there and smiled, almost laughing, at the smiling Puppy piñata bobbing up and down as if he were playing with her. I imagined if that Puppy could talk he would have been saying something like “Hi there! My name is Poochie, what’s yours? Let’s go play together on a rainbow and eat jelly beans all day, OK!” all while my daughter and about a dozen other eager kids were anxiously waiting to feast on the Puppy’s innards of unknown candy.

Poochie never had a chance when a large 5-year old with a debatable mustache and real looking tattoo had a turn. With two large swipes Poochie the Puppy looked as if he had grown wings and had flown about 10 yards away from the death arena. Then the mustached 5-year old with his posse of admiring fans, ran over and started pounding the Puppy on the ground all while yelling and screaming.
Given the looks of he and his parents, I swear I overheard him saying things like “Why don’t you ever listen! Why do you always laugh at me!! I don’t like it when you drink so much!!!”

The 2-year old birthday girl was nearly in tears. If she could speak much more clearly I think she would have said something like “Goodbye, Poochie, I guess we’ll never get to play on that rainbow after all…”
She quickly got over it when her mom picked her up and tossed her into the mob of screaming kids with spilled fluorescent packaged candy.

They even let her fill the severed puppy leg with candy.

When the mustached 5-year old stood proudly smiling holding the decapitated Puppy head, while his parents were congratulating him taking his picture, I wondered where in the world did this concept come from. Who in their right mind thought it was a good idea taking cute animals or a kids favorite cartoons character, fill them with candy, hang them, and then beat them up with a baseball bat?

Then the next day when the TV was left on unattended, the perfect piñata for any birthday came to mind: 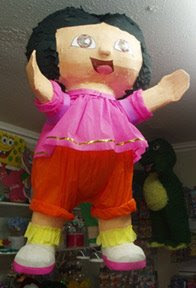 Your exploring days are numbered...