A Letter from the Tooth Fairy 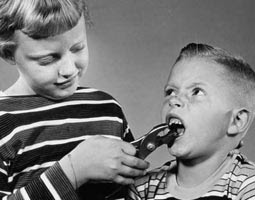 My daughter lost her first tooth this week and it was quite the historic occasion as it had been wiggling for nearly 2 weeks.

My wife and I finally had enough and just pulled the thing out. Which wouldn’t have been too bad if it weren’t for blood that appeared everywhere which, in turn, ended up completely freaking her out. She kept screaming while crying, “OH NO!!! I’m spilling BLOOD!!! Now vampires are going to EAT ME!!!”

Her ex-nanny was really into Twilight.

The drama was finally over after I calmly explained that vampires only live in the Seattle area, then she became excited wondering how much the tooth fairy was going to leave her.

Oh yeah…completely forgot about that part.

Her friends at school have told her that they’ve gotten anywhere between $2-10 a tooth, which I find a little much. In my day, I remember getting a quarter ($.25) and that was only if I didn’t swallow or lose it first. My wife on the other hand didn’t get any money, the tooth fairy in Ohio left her underwear and socks.
My daughter didn’t want underwear or socks, “just the money.”

I reassured her that there wasn’t anything to worry about as we don’t live in Ohio and we weren’t planning on moving there anytime soon.

“Good! That sounds like a bad place to lose a tooth” she replied with relief.

After she tucked her tooth behind the pillow and we kissed her goodnight she asked, “What does the tooth fairy do with all of the teeth anyway?”

So after my wife and I negotiated and settled on a sum of $2, without addition of socks or underwear, she ran to the ATM and then stopped somewhere to get change while I was at home writing.

My name is Natasha and I’ve been assigned to be your Tooth Fairy! Thank you for the shiny, well-brushed tooth. I can tell you’ve taken really good care of it. Because of its condition I have left $2.00 USD in its place.

In case you were wondering, most teeth go into the Tooth Fairy collection vault in the Tooth Fairy castle in the clouds where they are guarded by large white unicorns to keep vampires away. But sometimes special ones, like yours, are used for new babies.
Don’t worry! Your baby brother already has all of his baby teeth so he won’t be getting any of yours. That would be kind of gross, wouldn’t it? (LOL!)

I look forward to working with you. Next time leave freshly baked chocolate chip cookies.

P.S. I’m SO glad you don’t live in Ohio. The law there requires us to give underwear and socks instead of money.

And here's a printable Tooth Fairy letter in case you want to make one of your own.. 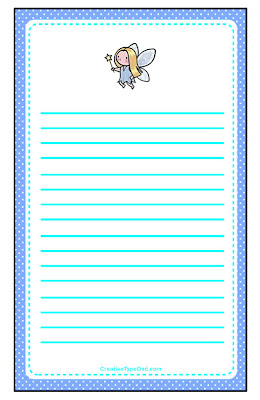 I am mean and only give a dollar per tooth and a piece of gum. I finally got tired of having to dig under the pillow and got my kids a tooth fairy pillow that hangs on the door for easy tooth extraction and reward placement. My kids were light sleepers and loved to deeply bury the tooth right under their head so i had to get extreme.

LOL!!! I think you need to make up and "inspected by #227" sticker made! ha!
It's a sign of the times that you put "LOL" in a tooth fairy note. sheesh.
Wouldn't it be ironic that the tooth fairy eats lots of cookies and has terrible teeth?
Congrats to Miss G!

Awesome Mom -- I like the door hanger idea. Maybe I'll try that on the next tooth.
It just has to have a place to hold cookies.

Kelly -- So you caught the reference - I liked that show...

i love that any time i stop by your place I'm sure to laugh.

Thanks for making ME LOL (at my son's karate class no less). Brilliant and hilarious!

Too funny!!!! My son didn't want someone he didn't know coming into his room so missed out until a few years later then wanted to put his tooth collection under his pillow for a lump sum....that request was declined. Next request was to string them for a necklace, that too was denied. My daughter was so petrified of pulling her tooth, she had a major fear of blood though it was literally hanging. I feared she would swallow it in her sleep. I actually went in her room while she was sleeping and managed to push it out with a q-tip as she slept...that's how loose it was. Sometime later she amazingly morphed into a fearless tooth puller.

That is a hilarious letter. Love it.

Yes, we have a lot of vampires here. Pretty sure I work with a few blood suckers.

Cool! Glad to see you are still carrying the SAHD torch!

Hope all is well with you and yours, haven't heard from you lately. Take care.

Auuh, the tooth fairy was nice! Your daughter was really influenced by the vampire stuff in Twilight, huh? She must know that those are just stories. Well, good thing you calmly explained to her that vampires were away back then. Is she into them 'til now?

Well ... that is an interesting selection of titles, I have to admit it!