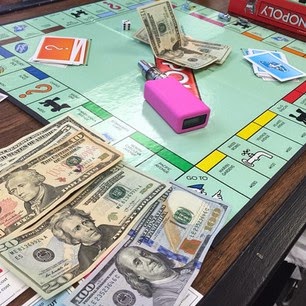 My 9YO daughter asked me a few days ago, “Have you ever played Monopoly?”

“Uh, yeah…of course I have! Like, millions and millions of times.”

When I grew up we didn’t have the Internet. After the sun went down my family only had a few options for entertainment: 7 channels of TV with virtually nothing to watch (we didn’t have cable as that was for the “rich".) Read. Draw. Or played games with the family such as cards, usually poker, Uno, Parcheesi, Life, Battleship, and Monopoly.

Then I realized how crazy it was to be 9 and to have never played Monopoly. What kind of parent am I? Teaching her how to #hashtag, code, draw, tear apart and modify toys when every kid should have played Monopoly at least once by now. It’s almost like growing up without candy, birthday parties, or any (delicious) gluten. I immediately pulled out my iPhone and ordered it off Amazon.

Amazon Prime is so awesome and dangerous. Every time I use it I feel like that Coyote in those old Roadrunner cartoons ordering from ACME. I really wish Amazon Prime would deliver in wood crates; that would be awesome…

When we got our package we began to play almost immediately. Then my childhood memories came back to me in a quick flash. I realized that Monopoly could be played 1 of 2 ways:

2. You play as you would any other human.
Nearly 2 hours into the game, I had hotels on Boardwalk and Park Place, owned about half the board, and was trying to teach her how to negotiate with me before her mother was going to go bankrupt with everything she had earned in the last 2 hours. And just then, her big eyes welled up, she got up and said softly, “you’re a bad daddy” and walked away.

After I collected the rent she owed me from her stack of money, my wife nearly wrote out a divorce contract on a nearby used paper towel (which happened to be mine as well…)

As I lay in bed that night, thinking, I realized that my family ways might have been a bit too harsh. We had to play until the end no matter how rough life (on the board) was or how many hours had gone by. You couldn’t walk away. You weren’t allowed to give up. You played and learned how to negotiate into eventually winning (and destroying the other players) and when you finally won - it felt great - because you knew how long it took to get there. It meant something real. My family doesn’t fight about politics or religion; no, they fight over who won in the last game of Monopoly!

Game can’t all be like Candyland where the point is just to make it to the end without crying.  There aren’t even dice in that game, only colored cards and the only conflict is staying out of the molasses  “Oh look, I got stuck in molasses swamp… I’ve learned a valuable life lesson.” That doesn’t mean anything. Nobody learns anything from that other than just stay away from something called molasses that nobody ever uses anymore!
Now Monopoly on the other hand - Monopoly is life.

Word to your mother (and her paper towel.)
Posted by Creative-Type Dad at 4:09 PM