How To Deal With Kids Nightmares 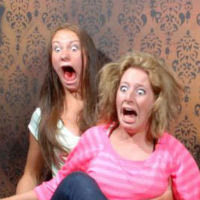 I was awoken abruptly by my 5-year old standing 5 inches from my head saying he was too scared to sleep because Zombie’s outside were going to eat his brain if they got in the house.

Then he started walking over to my sleeping wife to which I told him immediately, in a whisper-panic, “NO, NO! NO! Don’t tell mommy!!”

Why? Because then I would get in trouble and that just can’t happen (again.)

Yesterday, I downloaded this game Plants Vs. Zombies to his iPad after he saw some older kids playing it over the weekend. And by "older" I mean 6-7 year old’s. He thought it was cool because they thought it was cool and couldn’t stop talking about it.
I played the game years ago and loved it, so I thought, “Hey! A fun little Zombie game were they’re attacking a house, and when they get in, they mumbled 'brains'... and a guys yells 'NOO!!’, and then you hear crunching noises, wouldn’t be so bad for a 5-year old... right?”

Well, at the time it seemed like a pretty good idea.

So I did what any sane and tired parent would do. I put him back in his bed, kissed his forehead, and told him as long as he doesn’t wet his bed he has nothing to worry about.
Posted by Creative-Type Dad at 7:54 AM

Dads are waaaay better at being fun but at the same time scaring the crap out of kids than moms. My husband let all of our girls watch the movie Signs. Two years ago. They still have nightmares. He will never live it down.

They get over it pretty quickly. Jorja played it at six, so that means her brother, Atticus, played it at five. They lived. No brains were eaten :-)

Unknown said...
This comment has been removed by the author.
1:53 AM