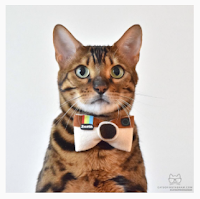 Back in 2011 I signed up for a little photo-sharing App called Instagram. I loved it from the start - the filters, the creativity of people from around the world of photographers, artists, interesting hobbyist, vinyl record collectors, hand-letterer's, foodies taking pictures of food - who knew that could be so interesting?

Oh, and of course, close friends!

My wife soon jumped on in 2012 and has since used it more than anything, even Facebook, which she has pretty much nearly abandoned.

The Kid "Follow's"
Soon my daughter, 8 year's old at the time after getting an Apple iTouch that she got for Christmas, asked for her own Instagram account.


After some discussion and setting some rules, my wife and I made sure it was private and we would approve who she followed and who was allowed to follow her back.
Over the years, now pretty much all of her friends ranging from 9-11 and some as young as 7 are on it. Kids from school, church, kids of our friends, camp friends, friends from after-school activities, whatever.
The kids these days now use it as their premiere go-to social network. Who knew that Instagram, or IG as they call it, would have migrated that way?

To be clear, most ALL of her friends are on it. And they use it a few times a week some a few times a day and all of their parents (well parents that we know) know about it. Yes, some are not-private which scares me personally, but the vast majority are private, using anonymous names, or just first names, and we all follow our kids and watch them.

Breaking The Law?
So imagine to my surprise I come to find out that Instagram is actually illegal for kids under 13?

Yes! And YouTube. YouTube, second to Netflix, is what the kids watch all the time much more than TV with its cartoons and lots of great how-to videos and such. The legal terms says this:

"In any case, you affirm that you are over the age of 13, as the Service is not intended for children under 13. If you are under 13 years of age, then please do not use the Service"

To skirt around it and to their credit, YouTube launched a new limited "YouTube Kids" App that is really only for preschoolers.

Research
This took some digging, and reading, and more reading, and then eventually what turned into many conversations with a few privacy attorneys that specialize in COPPA law.

My research and take in a nutshell-

Back in the 90's government officials got together with some so-called parent advocacy groups (which pretty much was the 1% vocal minority with no real experience in technology) to create laws "protecting kids" from the internet called the "Children's Online Privacy Protection Act of 1998 ". To their credit, it seemed pretty well-intentioned at the time to non-techie parents who didn't get the internet at all. But because parents became more tech oriented growing up with the stuff, and technology pretty much re-invents every 18-months or so and creates new ideas fast, and the old web turned more into the mobile web from the advent of the Apple iPhone in 1997 creating the modern-day smartphone with all of it's Apps, the laws became outdated fast.
Then, because the government is pretty much slow to respond to anything, they got back together and in 2013 updated those laws. To their credit they did talk with a few of the larger tech players this time around, and again to the vocal 1% minority which got most of their way, but now it did give some advantages to some really large players like the YouTube's and Disney's of the world as they can cover the expenses but smaller entry players are out of luck trying to comply to COPPA laws. Make one minor mistake and they're bankrupt with the absorbent compliance fees.

But of course those 'new' laws have become outdated, once again.

How To Fix It?

One major thing lawmakers and the vocal 1% so-called advocacy groups don't understand is that kids WANT to be where everybody is and not on some remote island and parents just need controls that are specific to the App. The "one-size-fits-all" rules don't work! These advocacy groups want their ideal scenario in the world that all should conform to, but in the end, they end up hurting the people (kids) they want to help by pushing them into breaking the law.

So back to Instagram, I'm absolutely sure they can easily make a 12 and under setting.  Just put in the parents email address instead of their own, allow parents to make it private/approve friends, or allow the kid to do so, or even allow the kids to the ability to drop in open comments. If my kid gets crazy with them - I can turn them off delete, erase. BUT the law doesn't allow Instagram to even figure any of that out -  it's pretty much black and white. All in 13+ or not at all 'in compliance' with COPPA laws.

So now we have a whole slew of "tweens" on Instagram breaking the law with most all parents allowing it, but with NO controls because Instagram is not allowed to even acknowledge it or they'll get fined for each 'violation' which can pretty much turn into billions the way the law is written. I'm sure Facebook, their owner, just doesn't want to bother with the PR nightmare of changing, or better yet, abandoning the the law. Imagine the field day the so-called vocal parent advocacy groups would have with that and the news headlines of, "Facebook WANTS to put your children in DANGER!" (photo of preschoolers.)
Yes, my 10YO is on Instagram and I allow it because our laws won't allow places like Instagram or even game Apps, to work with real parents (not so-called non-tech savy advocacy groups) in relation to their specific App or product to put in controls for parents.

Until these laws are downright removed altogether or greatly amended allowing individual Apps to work with parents actually using the service, they have to conform to a one-size-all outdated government policy ultimately hurting the kids they think they're helping.

*photo credit: @cats_of_instagram
Posted by Creative-Type Dad at 11:03 AM

I'm kind of on the fence about this. I really try to monitor everything that my kids do online and didn't let my oldest sign up for Facebook until she was 13. She feels it impedes her socially, but I feel like getting outside with people in real life is good for the kids. We don't have cable but we do allow our kids to watch age appropriate things on Netflix, which again, they hate but I feel is a good thing. I don't think my kids need all of the stuff on that is on tv and in commercials shoved in their faces, but I don't know. They will probably all still need therapy regardless of what rules I lay out.