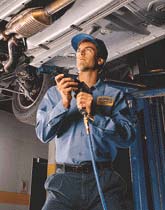 You heard me right! I actually learned and changed the oil in my MINI Cooper (my first oil change on any car my entire life). All because the MINI/BMW dealer wanted to charge me $250 for a freakin' oil change. Yup, I went out and told everybody I know how ridiculous it is that dealers can get away with this stuff and along the way told my good friend's dad who use to own a ‘shop’ in the valley. He then told me to drive over his house and he would teach me… and I did! And it only cost me $47 for "the best" oil and a filter. Once I closed the hood, I flexed my pecks, arms, and shot "the bird" over to the direction of the BMW/MINI dealer all while yelling into the air "how do ya’ like me now, be-yatches!!" It felt good. Almost like finding $200 in your pocket after taking the pants out of the dryer.

While scrubbing my hands removing the greasy oil I swear my voice got a little deeper and about 3 chest hairs grew that instant. There's just something spiritual about a guy doing work on his car, like you feel at one with ‘the Fonze’ or 'Jo’ Polniaczek (men who didn’t really work on machinery but played it well on TV).

When I got home, I threw the keys on the counter and announced to the wife that the ‘man of the house’ was home. After I grabbed her by the waist and planted a big wet one, I told her how I felt as if I could go build a boat out of paper clips and duct tape. After she giggled, she asked me to finish washing the dishes. Women just don't get it. She thought I would end up doing some serious damage to the car, but my response to her was that "men have been changing oil in their cars for centuries before Jiffy Lube began in 1876. I’m just keepin’ it real Little Lady”.

You tell 'em Tony! There's hope for all the white-collar men out there, my hubbie included.

Wow, I can feel the testosterone from here.

I say this having no idea how to even attempt changing the oil in my car.

Two of my favorite things in that post -- use of the word bee-yatch, which is an all-time winner and the fact that you could spell Nancy McKeon's Facts of Life character's last name. And, sheer mention of her in the context of oil changes and the Fonze made me laugh out loud.

Dude...you would be hard-pressed to find a less mechanically-inclined guy than me. I can't fix ANYTHING. But even I've changed the oil in my car before. And yeah, I didn't get much credit for it from the missus either. Congrats and welcome to the club!

Waya - actually I was a little nervous when I started the car. A big sigh of relief came out when it came on (and ran).

dadinprogress - I'm sure Polniaczek would be proud too!

MetroDad - Looking forward to that club member card in the mail. Maybe it'll have a coupon for some pork grinds and Stetson cologne.

Hahaha!! Congratulations on your entry into manly manhood. Now go crush some beer cans on your forehead!

Awesome job. So, if I get a MINI I can drive the last 3000 miles all the way to you so you can change my oil?
*puppy dog eyes*

That's awesome! I'm so proud of you (although that sounds lame, so insert whatever congratulatory expression sounds more cool).

You think the Fonze. I think Steve McQueen. Either way, it's good!

Wow. Next you'll be rotating the tires! (Which hey, even my husband does that) But watch out with that power tool, will ya? You're kinda waving it around a little close...

Way to go! Almost makes me want to learn to change the oil in my car. Almost.

I have the excuse of having a steep drive and a busy road. I prefer to have my oil changed for me.

However, I grew up changing oil in my cars and no longer lack chest hairs.

Nothing like a Jo Polniaczek reference to brighten one's day.

I always crack up a little when I see her dad as Moe Green in The Godfather.

Did your biceps grow too? Cuz my hubs swears everytime he changes my oil, that he gets a little closer to impersonating The Incredible Hulk. Minus the anger management issues and green skin, of course.

Congratulations, dude. Or shall I call you Mr. Dude, now?

Awesome! And 3 whole chest-hairs! How nice!

I think I smell your testosterone.

This makes me want to try to change the oil in my own car. Where do I find the oil tank?

I think testosterone is a by-product of motor oil. That's the secret.