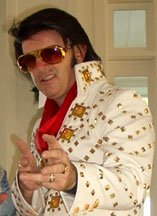 (Instead of telling the story over and over, why not just write it down). Yes, Elvis was a little late to the party, actually about an hour and a half late. And in kid-time, that’s about 3 days. The natives were getting real restless, while waiting for the cake, games, a monkey on a tricycle blowing bubbles (?)…Anything at all, so they could pack their worn-down sugar-high kids into their minivans and SUV’s, then fall asleep on the way home. My wife and I had to quickly use the back-up plan games to stall before the “surprise entertainment” showed up.

Elvis was supposed to arrive at 1:15 with his assistant to set up the P.A. system, get dressed, etc. for a 2:00 cake singing performance. When 1:30 came rolling around, I started getting a little nervous (Traffic? Directions? Lost?…) but when 1:45 came and his performance time looking pretty late... I called his home number (the only number I had). Elvis answered the phone on the 8th ring and it went something like this…

In my mind all I could picture was this guy in this dingy old smelly 1970’s apartment building, in the middle of a beat-up neighborhood. Maybe with his broken mini-blinds closed, with the sun dust beams peaking through. Sitting in an old patched-up broken lazy-boy chair surrounded with beer cans, pork grinds, pizza boxes, streamers in hair, etc. Still in his stained, smelly Elvis jumpsuit. Possibly with “Wheel of Fortune” playing on the T.V, all fuzzy with clothes hanger “Rabbit Ears”….
I also heard my wife’s voice telling me that’s what I get for hiring an Elvis impersonator for our daughter's 1st birthday party (why not get a bouncer?)…who probably thinks he is Elvis…. and recreating his life.
I also heard my daughter sometime in the future (teenager?) calling me from some pay phone in Arizona, crying and telling me she got pregnant, and ran away with some truck driver, all because I hired some scary drugged-out Elvis impersonator for her first birthday…and it was my fault for everything she’s done (including wrecking my Mini Cooper).
Yes, that all went through my mind.

Thank God he showed up and the guy “looked” normal. Actually he’s some Welsh guy (Tom Jones is Welsh…how bad could he be?!) who is married with a 6-year old daughter and a homemaker wife. And the guy’s “day-job” is an accountant…. or anesthesiologist?
I wasn’t quite sure. Anyhow, it turns out…so far, I might be "O.K." at this father business after all.
Posted by Creative-Type Dad at 9:00 AM

Great conversation with "Elvis". It's hard to get contractors and othe folks to show up on time. And I guess the next time I hire an Elvis impersonator (well, that would be the first time), I'll have to keep your situation in mind.

You are doing a great job in the fathering business- my god, look at how special you made her first birthday! I'm astounded.

You forgot the amphetamines on the nearby table and the needle dangling out of his arm...

The picture of the party is priceless. I predict it will be the subject of many therapy sessions later in life.

You know if you truly loved your daughter, dad would have pulled on the spangled tights himself...

Who am I kidding?? I'd hire the contractor every time!!

You're the ones that're gonna be singing 'Heartbreak Hotel'.

I'm an actor, and I know way too many people that have ended up where Larry is. Its a scary place. Just remember - he once had a walk on part in 'Cheers'.