San Diego Made Me Sick! And Shamu Loves Kenny G 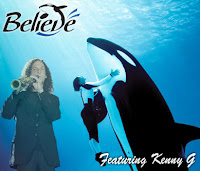 It did, literally. And now I’ve had a nasty cold since Monday. If anybody knows of any good remedies, please share.

We spent the weekend in scenic San Diego with some friends and their now 3-year old daughter, or as my daughter likes to call her “NO! My friend!” She's in this “No - My” stage right now that I'm finding difficult to break. Everything is hers, “No! My Daddy!”, “No! My Car!”, “No! My Princess!”, “No! My *insert pretty much anything*”.

On Saturday we were at the San Diego Wild Animal Park. We haven’t been there in about 9-10 years and the place doesn’t look any different - it’s still big, and has a valley full of “wild” animals that have been living in captivity for nearly 40 years. The only part that changed is that they now charge extra for everything in addition to the entry price. So you pretty much pay admission just to use the sidewalks.
My favorite area in the park was this HUGE Slush Puppy wagon near the Lions - I loved these Slushies growing up. I found them to be far superior to 7-11's Slurpees.
Anyhow, after I bought my $6 cup (inflation?) and filled it, the nearby Lions were all staring at me like I suddenly turned into a huge turkey leg. My daughter picked up on it and told them “No! My Slush Puppy!”
And then she experienced her first brain freeze near the African elephants trying to quickly drink about 1 gallon of melting slushy - by the way - trying to explain a brain freeze to a 2-year old is extremely challenging. I stopped trying when everybody around us was talking about this one elephant who was really excited and was dragging ‘it’ on the ground as he walked.

The next day we paid a visit to Sea World. Sea World was much better as the shows and rides were included with the price of admission – how old fashion but very convenient of them. And what made it even better was that none animals were dragging anything around.
As we walked around throughout the day I couldn’t help but to notice Kenny G playing the entire time. It was like somebody left the CD on repeat all day. Later, when I was asking a Hostess where the local Slush Puppy wagon was, I also asked about the Kenny G. She told me (jokingly) that all of San Diego loves him.

Then my daughter said “No! My Kenny G!” 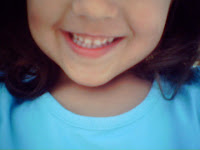 We went to yet another kid’s birthday party over the weekend, but this time was a little different because my daughter insisted on bringing her Fisher-Price toy camera along. You know, the one Santa gave her for Christmas and was interested in for about a week and then decided it wasn’t worthy of attention anymore because she thought a cheap Happy Meal toy was much more appealing…

(Uh, what is it and what does it do? Oh yeah, make annoying noises...)
Well, I’m not sure what caused this sudden interest of picture taking again but it seemed as if she wanted to take the camera everywhere. To the store, park, pool, bathroom (while I was using it), etc.
The wife and I suspect that she saw one of the neighborhood kids or somebody on TV using a camera. It’s strange, if an older kid or character does something – she’ll want to do it too. Except, of course, pooping on the potty.

Her giving into peer-pressure scares me. For instance if Elmo told her to steal my credit card, passport, social security number, kidney, and send them to him she would do it in a heartbeat. By the way, that’s exactly why I sleep with the door locked at night.

Anyhow, she wandered around the party with the camera taking pictures for about an hour or two until she filled the 1,300 picture capacity memory card. 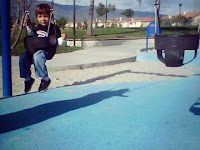 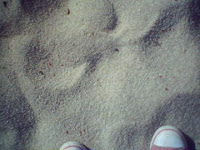 "Sand detail and its shoes" 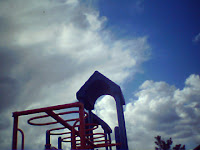 "Untitled, with clouds and bars" 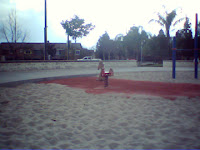 "Rocking Horse with No Friend to Share Ice Cream With" 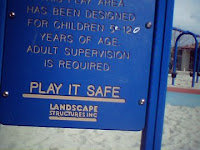 "The Man Imposing His Rules on the Little People" 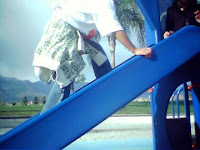 I knew she was done when she walked up to me while I was eating my Jell-O and cake, handed me the camera, and showed me her index finger saying “Look dad-DEE!... Booger.”

And then she wiped it on my pants and ran away.
Posted by Creative-Type Dad at 12:10 AM 36 comments:

Happy Birthday to… Me! When Did I Get So Old? 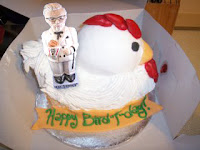 I’m another year older, and the sad part is that my wife had to remind me of my exact age because whenever someone asks I always say 21.
Actually I think I’ve been saying that line since I was 17.

Anyhow, Birthdays around my house don’t last for just one day, they last the entire weekend.
This year, without a doubt, had to be one of the best I’ve had in a really long time thanks to my wife, friends, and family. It all started on Friday with co-workers bringing in fancy cupcakes, balloons, and some completely unexpected gifts including some custom printed Lionel Richie cocktail napkins from a design that I had fashioned as a joke awhile back and hung on my office wall: 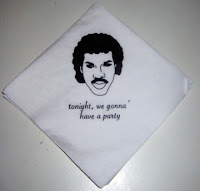 “tonight, we gonna’ have a party”

These are definitely going to be a staple at every party I have from now on, along with of course, a bucket of KFC.

Then Saturday a few close friends made an amazing Greek dinner spread complete with a homemade Reese’s peanut butter cup ice cream cake. And if that wasn’t enough check out a small sampling of the gifts: 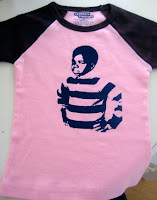 For my daughter to wear. I swear she does this “whatchoutalkin’bout willis” stance nearly every time she gets in trouble.
Colonel Sanders’ Tijuana Picnic - LP 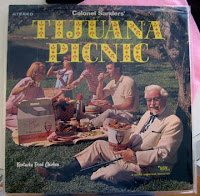 ((speechless))
Can I just say how awesome my friends are? I’ll be sharing more of this swingin’ album soon.
Sunday (actual birthday) we made a trip to Disneyland with some family including my brother and his kids, all of whom I haven’t seen in well over a year. That place wore me out; I swear they need to open a ‘sleep ride’ somewhere in there for parents (and old people) like me can just take a snooze.
And it didn’t end there; today I took the day off of work to spend with my daughter - a tradition I’ve started ever since she’s been around. And the best part, I got to take a 2-hour nap while she was taking hers… pure heaven.

Seriously, I wish I could nap everyday. Then I could be dreaming of those swingin' KFC picnics in Tijuana, with the Colonel lounging by a nearby tree. And then when I wipe my mouth with Lionel Richie napkins I could tell him "Look Colonel, Lionel's got some chicken crumbs stuck in his mustache!"
Then we'd laugh and eat some more popcorn chicken.
Posted by Creative-Type Dad at 12:08 AM 43 comments:

Saturday was the day we finally saw The Wiggles in concert and from the way my daughter had been acting all last week, you’d think she’s been waiting to go since the day she was born.

When they finally ran on stage she screamed like a Japanese schoolgirl meeting Hello Kitty for the first time and absolutely REFUSED for the wife or I to pick her up. I guess she didn’t want to be seen with us, you know, because it’s embarrassing to be seen with your parents at a preschool concert when you’re 2.
Anyhow, instead of watching them on the stage she watched them on the giant TV… just like she does at home.

Overall it was a fun show and much better than I expected. In-between sets Murray jumped into a “My Sharona” guitar riff and Jeff followed, of course, after the kids yelled “Wake Up Jeff!” Later they did a small riff of Rick James “Super Freak” and Henry the Octopus did some crazy MC Hammer dance along with Anthony and Captain Feathersword. The kids loved it.
Although, I was a little surprised to see that some parents were having a better time than their kids - screaming, yelling, swooning, dancing around shaking their behinds suggestively... from the looks of it, you'd have thought they were at a Rick Astley concert.

After awhile it was more entertaining watching the parents. And then I couldn't help but to compare "The Wiggles" concert experience to others I’ve been to in the past:

The Wiggles Concert Vs. Concerts From Long Ago

1990 Depeche Mode Violator Concert: Participating in a food fight at Dodger Stadium with a lighting storm in the background during “Waiting for the Night.”
2008 The Wiggles Concert: Cheerios being thrown at my head by a Toddler sitting behind me and the kid in front of us wailing during “Quack Quack” while the mom is yelling Anthony's name.

1992 The Cure Concert: Some drunk guy running on stage and being tackled by security at the Pasadena Rose Bowl.
2008 The Wiggles Concert: Sugar-high kid rushing onto stage and jumping into the “Big Red Car”, dad captures him but stops first to take a picture of his son in the car.

Multiple Tom Jones Concerts: Underwear being thrown on stage.
2008 The Wiggles Concert: Toddler running down the aisle wearing a diaper on his head.

About 25 minutes into the show my daughter interrupted my "Hot Potato" routine to tell me that she had enough. She was asking for her crayons and doodle pad so she could color... just like she does at home when watching them on TV.
Posted by Creative-Type Dad at 6:00 PM 33 comments: