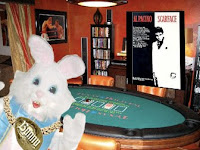 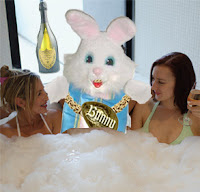 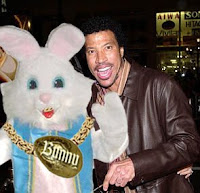 With Lionel Richie at his housewarming party
Posted by Creative-Type Dad at 7:00 AM 52 comments: 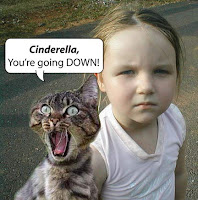 It’s not as if my 2-year old daughter has been watching Eddie Murphy Raw on late night TV, hanging out at the local Jr. High, or listening to rap music and throwing around F-bombs like Dora and her pet monkey Bubbles.

Nope, she’s been watching DVD’s like Pixar’s “A Bug’s Life”, Disney’s “A Goofy Movie” or a number of the so-called kid friendly movies which happen to use words like “idiot”, “stupid”, “shut-up” and “bad-Ass” in them (actually not the last one, but give Dreamworks some time and I’m sure they make a Quentin Tarantino & George Carlin animated “buddy” movie…)
Who would have thought these movies can cause a toddler to begin spouting off a kid’s version of swearing and use them correctly in context? Not me.

These days when she’s mad, angry, upset, tired, or when gravity doesn’t conform to her will she’ll yell out things like “Stupid (insert person’s or inanimate objects name)!!” or “Shut up, (insert person’s or inanimate objects name)!!”
What a far cry from her original version of swearing just a few months ago -- which was clapping her hands and yelling “HERE! KITTY! KITTY!” followed by a raspberry noise.
Maybe my uncontainable laughter at the act caused her to look for something with more authority?

Nonetheless, this needs to stop. So now I’m upping the ante with some good old fashion discipline to control this and a host of other “terrible two’s” behavior.

The traditional toddler discipline methods:
Time-Out – Which work most of the time, but doesn't quite work outside of the house.
Take-Away – Toys, princesses, crayons, Tupperware, etc.
Spanking – I still can’t do this. I’m not opposed to it and want the option just in case things get really bad, like if she pulled a knife at the ice cream truck.

Now I’m resorting to--
The non-traditional methods:
Jail – This works while in the car. I’ve told her jail is a place where people cry all day, no magic exists, and they play Mike Meyer’s “The Cat in the Hat” all day long (that movie makes her upset and cry.)
Monsters – Usually at night before bedtime I tell her that if she doesn’t behave, monsters will come and eat her legs while she sleeps. And Princesses need legs to be ballerinas.
Evil Bunnies – For some odd reason jackrabbits have started popping up around my neighborhood. I’ve told her that these bunnies can be nice or can chase bad children who don’t listen to their daddy’s.
Upset Princess Call –I pretend I’m talking with Cinderella on the phone and she asks for her Princess clothes and toys back because my daughter has been bad.

She’s been pretty upset with Cinderella these past few days. I just hope she never runs into her at an ice cream truck… 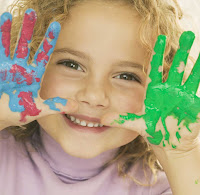 I know my daughter’s only 2 and kindergarten seems far away, but that doesn’t matter, because today I spoke with a worried, stressed out father about his 4-year old daughter's recent kindergarten interview.
And let me just say - it did not go well. They told her (not him) that she needed to work MUCH harder if she wanted to get in this Fall.

To be a somewhat fair, this is a ‘prestigious’ private school here in L.A. But who cares - it’s kindergarten for crying out loud! It’s not like she can’t spell her name, count, say her ABC’s, etc., she can. But evidently that doesn’t cut it anymore. Apparently the marketplace is flooded with 4-year olds that can debate strategic economics over Cheerios and discuss the recent downturn in the housing market after waking up from an afternoon nap.
It’s as if the world change and I was asleep at the wheel. How naive I was to think that kindergarten was a time of having fun doing things like painting, playing, making weird crafts out of egg cartons, milk bottles, and daddy’s empty beer cans? (puff of cigarette) It was when I was a kid.
Statistically I should be in jail, or worse, involved in multi-level marketing.

I don’t want my daughter to fall into this trap. I want her to succeed in kindergarten because if she doesn’t, God only knows the horrible things that might happen.
Hopefully with some prepping and training, it’ll go something like this:
Posted by Creative-Type Dad at 6:30 AM 53 comments:

Doodlebops Live! And Some VERY Interesting Facts About Me

We took my daughter to see the Doodlebops LIVE concert over the weekend. I swear, I thought she was going to rip her Pull-up off and throw it onto the stage.

Her little best friend, and her parents, joined us and between the two of them they screamed like fanatical Elvis fans for about 45 minutes straight. I have to say, it was pretty funny watching them trying to dance and sing along. My daughter kept telling the wife and I “Look! It’s the Doodlebops!…..over there!” followed by “Dance Daddy… Dance!!”

Those creepy Doodlebop kids really know how to put on a show. Moe was breakdancing for about 30 minutes straight and because of it started losing his voice. Deedee pretty much did 99% of the singing, and I’m not sure what Rooney’s talent is yet other than being freakin’ tall. Seriously, the guy is a giant and looked pretty scary when he came close to us. Most of the kids (me included) got quiet and backed up a little like he was about to eat everybody.

Overall it was amusing. My parents never took me to anything growing up and now being a parent I find taking my daughter to these types of things very entertaining. We’re seeing the Wiggles in the few weeks; I can’t wait to see her reaction to them. We'll be sure to keep that Pull-Up tightly secured.

VERY Interesting Facts You Might Not Know About Me 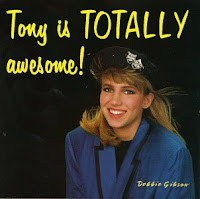 Rick tagged me for this meme:

1. I can play the accordion. But I can only play Depeche Mode songs on it. It’s a long story on how this happened, but the short version is I wanted to take piano lessons but my Dad got a “really good deal” on accordion lessons because some guy owed him a favor. Anyhow, I was really into 'DM', their songs were pretty easy to play and that's how it happened. If you want to experience Depeche Mode, you’ve got to hear it on an accordion.

2. In college, I worked as a page on some random TV sitcoms. The majority of the “stars” and guest actors were just plain rude, had major attitudes, and were overall complete idiots. A few come to mind...I won't name drop even though I'm really tempted. On the flipside, a few were really pleasant and truly friendly - Gene Wilder, John Larroquette, Amy Jo Johnson…the 'Pink Ranger' on the original Power Rangers. And she played the guitar and sang too. I guess she learned that in Ninja school.

3. I met my wife in Paris; she was living and working out there. Our first date was a 4-hour dinner in Paris's Latin Quarter. Our second date was 9 days and ended in Venice, Italy.

4. My favorite shows of all time are The Simpson’s, Golden Girls, Knight Rider, and Small Wonder. I have a special connection with Golden Girls because it reminds me of my late grandmother; I use to watch the show with her. And I think Dorothy's humor is funny. I’m still not sure why I like Small Wonder…

5. I had lunch with Debbie Gibson years and years ago (I mentioned this awhile back and got lots of emails about it.) It really wasn’t that big of a deal. We met through some mutual PR/Marketing people and had lunch with a few other people. Later that day she had her manager messenger me 30 tickets to her show at the House of Blues in Hollywood the next night with a signed card that said "Tony, Stay Cool Forever! Love Debbie." It was on my refrigerator for years; the wife even found it funny.
All I can say is that she was very friendly, had a great sense of humor, and could really sing. I wasn't a fan of her music back when she was popular (remember? I was too busy playing Depeche Mode on the accordion...) but now, I find her music catchy. I played “Shake Your Love!” to my daughter recently which was pretty entertaining. Maybe next time I should tell I tell her “Debbie once sang this to Daddy”

Then she’ll probably tell me to turn the Doodlebops back on and to stop shaking my love...
Posted by Creative-Type Dad at 6:00 AM 54 comments: