It seems like it was only yesterday when this blog was created, with a 3-week old baby who had absolutely no concept of what 3am or sleeping meant, was in my arms.

Back then I wasn’t sure about what I was going to “blog” about. Maybe about art, or design, or post my sketches. Or maybe about monkeys with handguns, mustaches and top hats or something like that.
But whatever it was, it was going to be temporary because I had other things to do like write a novel, a movie script, illustrate 10 books, and learn to speak French & Japanese while taking flying lessons.

But then I got sidetracked…

I started writing about family life, my KFC obsession, strange men’s facials, parenting, Ohio, breast milk (*shivers*), among countless of other weird things I thought nobody (except my wife or that angry in-law in Ohio because I'd never heard of a "buck-eye" before) would ever read.
Now that my daughter is 3 I keep wondering how long I'll keep this up. Maybe it's when the wife doesn’t pay attention to my gift suggestions about Christmas and Father’s day gifts anymore? Maybe it's when I finally own an island in the South Pacific? Or maybe it could be when my daughter is old enough to Google and finds out I’ve been writing about her for years and cries at me to STOP because I’m embarrassing her in kindergarten …?

CTD Highlights
Favorite posts over this past year:
And some favorites over the last 3 years:
1st year links
2nd year links

The post that started it all...
Confessions of bunny killer

A Colonel of Your Very Own

When I was a kid, maybe around my daughter’s age or perhaps older, Kentucky Fried Chicken use to give away some pretty cool plastic hand puppets of Colonel Sanders.
McDonald's later caught on to the puppet fever and released their own plastic hand puppets of Grimace, Ronald, and I think that weird bird that couldn’t fly because she ate too many Fry Guys... I don't remember her name.
No matter, everybody knew those hand puppets weren’t nearly as cool as “The Colonel” - at least in my area of the world.

I use to play with my Colonel Sanders plastic hand puppet all the time. It use to battle with my Gobots (‘The Colonel’ would always win fights with his signature drumstick chop torpedo of doom), I would draw with it (I swear I could draw better with it on, maybe it was the magic of 11 herbs and spices), and sometimes it would be my only friend at 1am when my mom finally came home from work smelling like alcohol and cigarettes (“Colonel, why do mother and father fight so much…?”)

I miss that hand puppet(s)

I don't want to recreate the past, but I can recreate the Colonel. So I’ve created a "Colonel" Paper Craft updated for a new generation complete with his cane, signature white suit, and of course bucket of that finger lickin' good chicken (with 11 unknown magical herbs and spices from the planet Kentucky.) 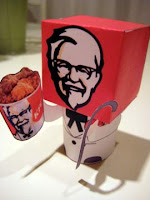 ...and here’s the Printable to make your very own: 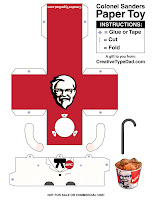 My daughter thinks he needs a friend so maybe I'll make a Lionel Richie one next...
Posted by Creative-Type Dad at 7:15 AM 41 comments:

So This Is What It Feels Like When Doves Cry… 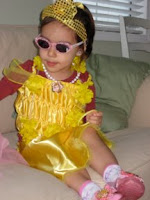 (It’s that time of year again; my annual letter to my daughter on her birthday.)

Miss Bean (or as you now call yourself “Princess Sunshine Sparkles”),

Happy 3rd Birthday! I can’t believe how fast this past year has gone by. It amazes me how much you’ve changed in so little time; the transition from a baby to a beautiful, smart, and clever little girl with a strong personality still completely fascinates me.


A few things I’ve enjoyed this past year watching you grow:
Your favorite things at this moment:

Dressing up as a princess, sparkle roll-on, Disneyland, watching movies on my iPhone, popcorn (or "crackcorn" as you call it), making “art”. DVD’s Enchanted, Tarzan, Cars, Incredibles, Lilo & Stitch, Cinderella, Mary Poppins, Dumbo, and Rambo (just kidding! That’s one of my favorites.)

Putting you to bed tonight on the eve of your birthday made me realize how much I’m going to miss you at 2. But at the same time I’m really looking forward to what new adventures and memories we'll have together at 3.