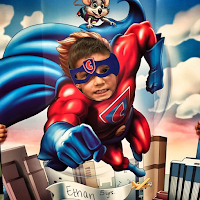 (A letter to my son on his 5th birthday.)

Happy 5th birthday Mr. E! Or as you call yourself, “SUPER-E!"
How can you be 5 already?
Just a few things you did and said this past year that I’m going to remember forever:

Your favorite things at this moment:

What you asked for your birthday:

And I’m always going to remember what you told mommy last night before going to bed - buy Scooby Snacks for your birthday party at preschool, “just in case dogs show up.”

I’m going to miss the 4 year-old version of yourself,  but I’m looking forward to what new memories and adventures we’ll make together when your 5. 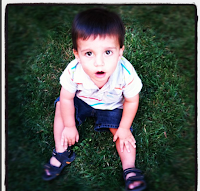 Posted by Creative-Type Dad at 12:54 PM No comments:

I Booked My Sons 5th Birthday At Chuck E. Cheese. Shame On Me And My Family For Generations To Come 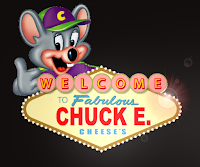 How could I? I had no other choice, my options were exhausted from waiting too long.

My wife and I have been talking about his birthday for months. My thoughts were to have it at home and invite a few friends, but apparently you can’t do that anymore when inviting friends from preschool - you have to invite half the school so kids don’t feel bad.
Maybe that’s why these giant trampoline, child gyms, child activity centers, and indoor bounce house places exist because apparently having that many 4 and 5YO’s over the house is akin to having a late-night frat party where things get broken, drinks are spilled on the carpet, and sooner or later somebody ends up riding a goat through the house while wearing grandma’s brassiere.

Those 'party' places know it too and charge massive amounts to have birthdays. Weekend 2-hour party’s start at $500 with virtually nothing included. Well, maybe air conditioning, lighting, and carpet but that’s about it. And these places are booked months in advance - some up to a year!

We attended a Chuck E. Cheese birthday some years ago for some neighbors (written here) and that was quite an experience. I walked away thinking, “I would never do that to my kid” and then years later I do the EXACT SAME THING! I’ve become "that parent."
Now I feel nothing but compassion for those people. I feel their pain. I still remember the dad apologizing saying things like, “Oh, I’m so sorry we had to resort to this place... we waited too long”

Well, I didn’t realize definition of “long” was just a few weeks.

The party is this weekend. I better break out the humility, prepare apologies, and hope my son doesn’t end up with a gambling addition by the time he’s 15 all because I had his 5th birthday at Chuck E. Cheese.
Posted by Creative-Type Dad at 7:50 AM No comments:

Where Imaginary Friends Go To Die

Sad news at breakfast earlier - my 4YO told the family that his imaginary friend of nearly 3 years had died the previous night while riding a tiger in Tijuana.

After telling us the gloomy news, he went about finishing his Frosted Mini Wheat’s while watching Woody Woodpecker on Netflix with his sister. Obviously, to say the least, the rest of us were more shocked by the news than he was.

Sneaky Gumball loved living life on the edge of mischief and danger since his appearance in 2012 when our son was about 2 1/2. I still remember the day he came into our home instantly appearing when our son was standing near spilled juice on the family room rug. When we had asked, “did you spill this?” he replied with, “I didn’t do it, Sneaky Gumball did it.”

Sneaky Gumball did all sorts of bad things. He stole French fries, lost Lego’s, threw balls indoors, broke toys, farted in closed cars while driving through the car wash and elevators; he even managed to steal our son’s pull-up at night, pee in it, and put it right back on him. Sneaky that Gumball was.

In addition, Sneaky Gumball's parents had made lots of questionable life decisions as they let him do dangerous things our son was never allowed to do. For example: when our son wanted to light matches for a bonfire and we refused, he would instantly respond with, “well, Sneaky Gumball’s parents let him play with matches…all the time.”
The conversation never ends well when your parenting choices are compared to that of some other “cool parents.”

Well obviously riding tigers in places lacking authority was not an entirely shocking ending. In fact, I wouldn’t be surprised if Sneaky Gumball’s parents bought him that tiger for his 5th birthday and left him alone at his parents Tijuana timeshare.
Posted by Creative-Type Dad at 11:11 PM No comments: