Tokyo, Japan: Tips and Places to Visit While Traveling With Kids 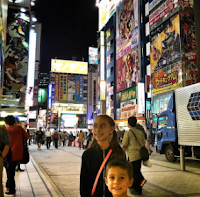 We just got back a few days ago from a family vacation to Japan something that we had been planning for years.

My wife and I have been there before, years before we had kids and at the time couldn’t believe how shockingly kid-friendly Japan was overall. Completely clean, the safest city on earth, and so much to do.
We’ve always vowed we would return when our kids were of good traveling age. Now that our youngest is 5 and both kids had a "fall break" vacation at school plus airline tickets are pretty half of what they normally are, and a really strong dollar (best I've ever seen) it seemed like a perfect time to go.

So what’s there for kids to do in Tokyo?  A few places I recommend:

Some overall tips and etiquette for visiting Japan, in general:


Hope these tips are helpful for anybody considering or planning a visit to Japan. It's definitely a amazing cultural experience like no other!
For any other tips or questions, feel free to comment below.
Posted by Creative-Type Dad at 3:08 PM 1 comment: