What To Tell a Toddler When the Family Pet Dies…

We came home this afternoon and discovered that our Beagle, Mr. Monkey, had died.

We knew it was coming for some time, about 2 years since the vet initially predicted because of his age and ails; but now that it has the grief and the guilt are kicking in. What has me really distressed is that I had a weird feeling about him last Thursday when he began losing his appetite. Now I have remorse knowing that I should have jumped on my instincts and taken him to the vet.

God, just the thought of him suffering alone with nobody around is just eating me up inside. I never wanted it to happen like that… 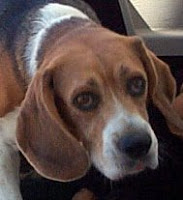 We found him at a Beagle rescue over 7 years ago, the weekend after we moved into our house. When we saw him we knew he was “the one” because he was very low-key, gentle, and just wanted to sit near anybody who would be willing to pet him for awhile. He had the personality of a cat, but came in the package of a dog.
He did have some odd traits, such as he wouldn’t put anything in his mouth, except food; wouldn’t play catch or fetch. And he couldn’t bark as his previous owners had him “de-barked” (the first I had heard of such a thing – a very creepy practice.) In place of his barking he made whimpering noises, which resembled a monkey, thus his name was given. Except we added “Mr.” obviously influenced by Mr. T.
Eventually his vocal cords did grow back and he was able to bark, a little, sounding more like an old smoker than a dog.
When our daughter came along she just adored him. He of course, like most dogs when a new baby arrives, didn’t want anything to do with her until she became big enough to drop small pieces of food - on purpose.
In the last year or so she began helping me care for Mr. Monkey. Brushing him in the morning and evening, feeding him at night, and serving him his meds. She had lots of 'conversations' with him which was both fascinating and entertaining. At times she could be showing off some “pretty dress” of hers, telling him what she’s done most of the day, or asking him if he’s seen some random movie. According to her, he has and likes all kinds of movies and he 'really likes' her dresses.

Since this just happened tonight, I’m expecting her to ask for him in the morning. And now I’m searching for the right thing to tell her.
Just how do you explain death to a near 3-year old, especially when it’s a pet that they’ve seen everyday for their entire existence?

I really don’t know. The only thing I do know is that I’m really going to miss him…
Posted by Creative-Type Dad at 12:30 AM 57 comments:

And Open Letter to Lionel Richie 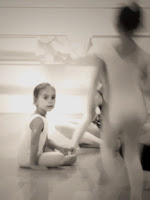 
While watching my daughter dancing around looking like an adorable little doll, Lionel’s song (Ballerina Girl, not Dancing on the Ceiling) suddenly jumped into my head. Later, the wife had informed me of the video featuring a Dad and his daughter - I investigated and saw something very creepy: That Dad in the video resembled somebody very familiar…

(Now where do I get a harp that glows with neon colors?)

Yup, that was me. Minus the ugly blue sweater and cool man-perm hair. But add a digital camera, video camera, and excessive smiling and waving, and you wouldn't know the difference. I can just imagine how ridiculous I’ve must of looked to the other parents, which happened to be all moms.
By the way, “Brick House” makes sense now too. 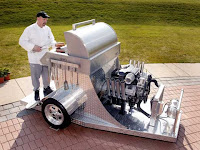 I did end up getting a nice little BBQ. Regrettably there was no Playstation 3, Xbox, Porsche, Italian-speaking parrot, or slave girl Princess Leia attached.

Although, the wife did break out a bucket of chicken, the spicy kind, while my daughter yelled out “SURPRISE!! Happy Birthday Daddy!!!”

Then we all ate, and I got to take a long nap. It was the best birthday ever.
Posted by Creative-Type Dad at 7:30 AM 39 comments:

How to Get a Toddler to Eat: Chapter 143 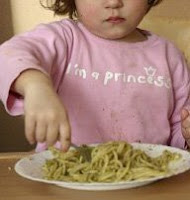 Apparently telling a 2-year old to eat because there are kids are starving somewhere in the world doesn’t work.

We’ve been having trouble this past week getting my daughter to eat. I’m not sure what happened or what caused this behavior; it’s as if she’s lost all interest in food. And to think just a few weeks ago she had the appetite of a construction worker.

Half the time I’m not sure where she’s getting her energy from; I'm beginning to think maybe she feeding from the radiation off the TV. The wife doesn’t think that’s possible. Obviously she doesn’t watch The Discover Channel.
So I came up with an idea: I’ve invited her favorite stuffed animal, Mr.L.B., to join the family at the dinner table. 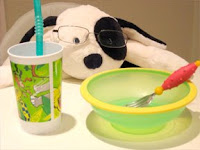 He has his own place setting, sits quietly at the table while he eats, behaves, uses his “please's” and “thank you's”, finishes all of his vegetables, and comes up with pleasant dinner conversion.
Well, except the time his favorite presidential candidate dropped out.
Anyhow, it seemed she loved the idea because she actually started eating a little. But I think she’s had enough because this morning I saw this in the bathroom trashcan: 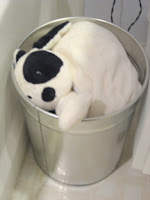 It's time to come up with another idea.
Posted by Creative-Type Dad at 7:15 AM 46 comments:

Wednesday began like any other - I was listening to NPR on the way to work and then heard something that went like this:

A federal grand jury has indicted a 33-year-old man on dozens of charges, accusing him of posing on the Internet as a teenager so he could molest at least 10 underage girls….

…using social networking sites such as MySpace.com and MyYearbook.com "to convince high school-age girls to have sex with him and pose for pornographic pictures," U.S. Attorney's office spokesman said…

…Monrovia police Lt. Richard Wagnon called the molestation case of Gregory S. S.'s one of the worst he has ever seen. (Full story here and AP here, FBI Release here.)
I nearly ran off the freeway in a mixture of shock and complete disgust. Greg was my best friend from 7th-12th grade.
I haven’t talked to him in well over 6-7 years. And when we did talk it was a brief conversation that didn’t go well. We had a falling out between senior year in High School and first year of college over a few things:
He got involved in a multi-level marketing insurance scam and became really aggressive about recruiting every member of my family, he was hanging out with these two sleazy cheese balls that I didn’t get along with, and oh yeah and there was “this girl” that he knew I was interested in and decided to move in on because of it.

An old friend from High School that I still keep in contact with called me a few months ago saying the FBI had called her asking her questions about Greg. They were calling everybody on his cell phone. They didn’t give much information to her about what he was being investigated for. Then I had heard from a few others in the weeks ahead and thought I would be getting a call soon. I never did.
The first thing that came to mind about this investigation was his involvement in the ponzi-insurance thing. I don’t think anybody had a clue about him being a child predator.

And then I looked at his MySpace, Windows Live, Friendster, and the most disturbing Netlog pages after getting emails from the old network of friends.
Looking through those had to be one of the most frightening things I’ve ever read. His life, pictures, so-called friends - but especially him posing as a 17-19 year old. He became this person I don't even know anymore.
Another old friend sent me the indictment, I couldn't read through it all because I began feeling sick after the 9th or 10th count... some of these girls were as young as 13. It's all truly disgusting.

This whole thing has me thinking constantly about a few things:
What if that thing back in H.S. didn’t happen or I just ignored it - would we have still been friends? Would he have been around my family or…. (gasp) daughter! I can’t even imagine… What if there was something I could have done to prevent this? Maybe I could have helped him? Maybe he didn’t have a real friend around telling him that this is completely and utterly wrong. Can pedophiles like this even be helped? From what I’ve heard he was still hanging out with those jerk guys from High School. I’m sure he told one of them about this, he liked to brag about everything… why didn’t they say something? What if those guys are doing the same thing? Out of the 10 (currently known) girls that he molested, why did only 1 tell her parents??

How many of these guys are out there right now trying to lure children?

That’s the one that keeps me up at night right now.
One thing I can say with absolute certainty I’m keeping track of EVERYTHING my daughter does and WHO she communicates with - especially when it comes to the internet.
Posted by Creative-Type Dad at 6:30 AM 48 comments: