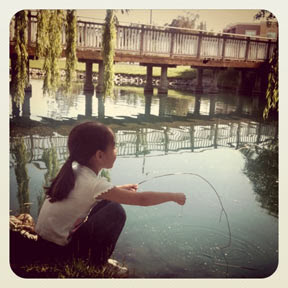 It's that time of year again - my annual letter to my daughter on her birthday...

Happy 6th birthday Miss Bean! Or as you call yourself, “Gillian with a G” followed with hands on your hips.

• After your first day of Kindergarten announcing to your mother and I that you were changing your name to “Jessica.”
• Your immense love and affection for your baby brother and being his tour guide through life.
• Your imaginary sisters Sauna and Nana have grown up and you don’t need to talk to them as often as you once did.
• How amazing you did at your ballet recital.
• Starting school in Kindergarten, moving up to 1st grade work by November, and entering 2nd grade in the Fall. Remarkable and a bit frightening for me.


Your favorite things at this moment:

• Your new American Girl doll, “Jessica.”
• Loving the same movies as Mommy, from “Meet Me In St. Louis” to “Xanadu.”
• Reading to your baby brother and some of your stuffed animals too.
• Playing games on the iPad together.
• Horseback riding, ice skating, and golf lessons (phew!)
• Drawing together and making crafts/gifts for friends.
• Sleepovers with your friends and staying up ‘really late’, like 9:00.
• Your favorite restaurant, Souplantation, still!
• Doing volunteer work for kids in other countries.
• Making everything into a game from walking, to riding in the car or airplane, or just simply sitting somewhere.

On the morning of your birthday I’m always going to remember the first thing you said to your mother and I while running into our room “I’m 6! Can I get a dog and a cell phone now?!”

I’m going to miss the fun we had together when you were 5, but I’m looking forward to what new memories await us all at 6.

A Summer to Remember and It's Not Even Half-Way Finished

I know it’s been awhile since I’ve written, but lots of things have been going on. So far, it’s been a strange summer. Some good things are happening and some, well…challenging doesn’t even come close to describing it.

Why Me?
I had to lay somebody off from work today. It was probably the second worse day of my life as I’ve met his spouse and son many times at work. The guy isn’t a bad person either; he’s friendly and a hard worker. It’s just a matter of bad timing, his role, intense pressure from executive management, and a bad economy - which seems to be getting worse by the month.
Since my boss left earlier in the year and I stepped up to replace him leading a group of 28 I can’t help but wonder if I made the right decision. It sure seemed like the right one at the time with the team backing me up and the support of new executive management. Things seemed to be going really well for a few months - my projects were all in an upswing and morale seemed to be at a high. Then about 3 weeks ago finance jumped in and started asking me on multiple occasions to justify every single person for each project in the foreseeable future, on my already lean group.
So far, I’ve managed to save more than they’ve asked me to cut, which to some outside of my team is an absolute miracle compared to other groups.
But I keep wondering what other miracles I’m able to pull off in the next 12 months, especially when every business decision I make can end up costing a whole lot of jobs next year.
That pressure alone is breaking me.

A Test for Raising a Teenage Daughter
My 16-year-old niece is out visiting for a month from Ohio and has been watching my nearly 6-year-old daughter while out here. Within 3 days she made friends with nearly every single teenager within 6 blocks from our home. Maybe even further, I’m still trying to figure that out. My parent challenge started at day 3 when at 10PM at night she asked if she could go to a friends’ house to hangout. This was on a Thursday and 10PM at night. I asked whose house it was and then went over with her to talk to the neighbor, who we (thankfully) know. Other days, I come home and there are 4 kids in the house -thankfully, no boys – my rule.
Seems like most days she’s hanging out at the pool for 2-3 hours with friends and strange guys are texting her late at night or she’s getting free ice cream and such because she’s “made friends with the guys that work there.”

I swear, I do NOT want my daughter to ever be a teenager. As a Dad, my stomach turns worried whenever my niece is out.
I emailed with my brother-in-law a week ago and he said she’s the reason his hair has fallen out.
Overall, she’s a really sweet kid. Problem is I still see her as that 2, 3, 5-year old years ago… but just taller.

6 going on 16
My daughter turns 6 this weekend and because she’s been hanging out with her older cousin she’s now really into music by people I’ve never heard of - she really wants feathers in her hair like the other teenage girls around us and she’s asked if she could get a cell phone for her birthday.

I need a summer vacation.
Posted by Creative-Type Dad at 11:40 PM 6 comments: