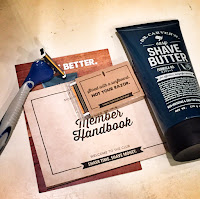 A friend sent me a hilarious video on YouTube called “Let’s Talk About #2” from a place called Dollar Shave Club. If you haven’t seen it I highly recommend watching when the kids aren’t looking over your shoulder.

I remember hearing about DSC a few years ago but didn’t think much of them. But after watching the video I thought, “hey, why not try it out... seems pretty cheap and useful” so I broke out the credit card and ordered the famous $1 razor along with some other items that were pretty reasonably priced.
The humor of the site really sold me over from the “real-world” humorous descriptions to the overall look of the website. These guys are clever to say the least.

The order came FAST, like, Amazon Prime fast. The packaging felt similar to that famous 'opening experience' you get from opening Apple products. I was expecting some small envelope but they send a coolish-looking box with some messaging printed on the top lid. Included with the products were card descriptions of each product and a new member handbook that even included a membership card for a free drink at "any bar in America!” with an asterisk of *not really.

Too bad, but clever nonetheless.

I must admit the build-up to using the product was pretty exciting. I hadn’t even tried it out yet and was sold on this club. But how were the goods?

I hooked up the new handle to the razor, put on their Shave Butter and tried using it. Nothing happened. The blades barely picked anything off. Thinking it must be the blade, I pulled that one off and tried another. Barely anything again.
And then tried tapping the blade to get the Shave Butter off to rinse and the blade fell off the handle. The handle connector is really flimsy. That happened a few times, the blades don’t connect to the handle well at all.
I tried washing the Shave Butter off and tried using a new blade, but again, barely any whiskers were coming off.

Highly disappointed with the Dollar Shave Club blades and razor to say the least. Their razor is about as effective as my 5YO’s fake Spiderman Razor he uses in the bathtub. 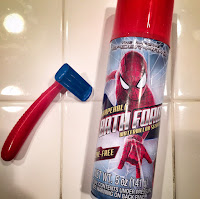 I do like the Shave Butter, I’ll keep that. But the membership is now cancelled as the blades are a bust. Sorry Dollar Shave Club, you sold me with the videos, humor, brilliant messaging, and even the packaging but in the end... your razor sucked!


Dollar Shaved club sent me the $6 razor in place of the $1 and wow, what a huge difference! It worked pretty well and the blade didn't fall off the handle at all. Dollar Shave Club should axe the $1 razor or maybe keep it around for teens that really want to shave but in reality don't need to. I bet nobody is getting cuts from that thing.
For everybody else, go for the $6 and the Shave Butter which is really like shaving with butter. Just don't taste it.
Posted by Creative-Type Dad at 10:29 PM No comments:

Preschool Graduation: just like watching an episode of the Muppet Show except with lots of crying! 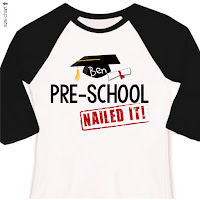 And it wasn’t the parents doing the crying.

My son graduated preschool yesterday, which is a little bittersweet, because it still amazes me how fast the time just flew by with the second child. Sometimes I just stare at him and think, “whoa little man - when did you get so tall? And how did you beat that FRAMED game on your iPad all by yourself? I can’t even do that. ”

I must admit preschool graduations have to be one of the most entertaining events on planet earth. I nearly forgot as the last one I’ve been to was around 5 years ago when my daughter graduated.

Kids walking out, all confused, waving at parents, making weird faces, pretending to poop/fart in the air. Then there’s always that one that refuses to walk out standing with her arms crossed looking angry like somebody just told said she couldn’t have any candy ever again, or a unicorn, while the teacher is bent over trying to negotiate just like arms treaty with communist Russia.

Hopefully, quiet and calm gets the job done.

While all of the kids were singing the infamous, “kindergarten here we come” song one girl stood at the end crying for her mom to take her home ‘now.' The kid next to her turned his entire body and stood quietly to just *stare* at her while the other kids were singing in the same key William Hung but with the energy and stamina of Beyonce’.
For a moment I thought a giant hook was going to appear off the side of the stage and pull her away.

When it was all over my son got a little upset about never going to school there ever again. Hard to believe this was the same kid which 2 hours earlier didn’t want to go to preschool because he would rather play baseball in the backyard instead.

He took pictures with his friends and on the way out, ran away from us to hug his teacher, Miss Julie. He told her that he would "miss her forever" in a dramatic tone that sounded like she was about to die - she was even taken back a bit.

Then he ran back to us and calmly asked if we could get stop and ice cream on the way home.

Posted by Creative-Type Dad at 7:39 AM No comments: