How To Get A Princess To Behave 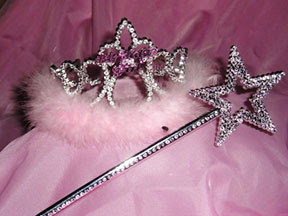 I was chatting with a fellow Dad at my daughter’s preschool about his son’s crazy obsession with Batman. The costume(s), the jumping off sofa and maybe occasional building; the permanent bat cave installation under the dining table, and the special Batman diet of only potato chips and hot dogs.
I told him he had it easy, my daughter is obsessed with Princesses. Which is just like Batman if he wore pink and sang to animals.

I’m not sure exactly when this all happened; maybe sometime around her 2nd birthday when somebody showed her the Cinderella movie for about 5 minutes. That’s when it became her crack.
At times it can be annoying:

“No, mice aren’t going to pick up that mess you’ve made”
“No, that magic wand isn’t going to make that kid playing with your toys disappear”

At times it can be used for my advantage:

“If you don’t behave (holding cell phone to ear) I’m calling Cinderella and she’s going to ask for her stuff back!”

So far, my 3 years of parenting has taught me the "Princess" method sometimes works much better than "time-out" method.
Recently we had the opportunity to see Julie Andrews and a certain Mom asked her if she had any advice for a little Princess.
She did and this is what she said (in her really cool accent):

Princess Rules
A Princess always uses “Please” and “Thank You”
A Princess always thinks of others before herself
A Princess never slouches
Although good, I don’t think there are nearly enough especially for a 3-year old. So I’ve added a few to the list:

My daughter started preschool this morning and it did not go as I had envisioned...

She being nervous while packing lunch, difficulty getting dressed, walking her to the classroom with her hand clenching mine, huge puppy eyes and tears as I’m about to leave, screaming “Daddy! Daddy! Don’t leave me… I love you!!” as I walked away quickly, but maybe stopping a few times waving and whispering “I love you too, now go back to your classroom and learn the proper use of safety scissors...” as I backed into and disappeared in a fog with Obi-Wan Kenobi and Dean Martin patting me on the back assuring me that I am a good dad.

That's what I expected. In reality it went something like this:

Uh no! I’m walking to your classroom and I BETTER SEE TEARS WHEN I LEAVE!!!!

I can just imagine what kindergarten is going to be like; she’ll probably end up telling me to drop her off down the street.

Happy Birthday To The Man That Invented Chicken in a Bucket! 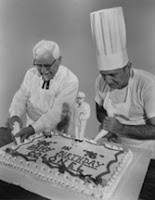 And to think I almost forgot... thankfully some cool folks reminded me.

It’s hard to imagine, but prior to the birth of Harland David Sanders in 1890 nobody even thought about putting fried chicken in a bucket.

It wasn’t until his 3rd birthday on a farm in Henryville, Indiana while packing lunch for his first day preschool that he told his father, General Sanders, “Father General, I would like the pleasure of preparing my own meal for today’s schooling. Sir.”
When his father of little words nodded in agreement, young Harland instantly put 14 pieces of fried chicken with 11 herbs and spices in a red, white, and black cardboard bucket.

And then with his chicken bucket and Princess backpack in hand, his dad took young Sanders to school.

And he didn't even acknowledge his father as he walked away from his classroom - not even a wave.

And his father was so upset that he didn't want to eat fried chicken anymore. But then he got over it and went through the drive-thru anyways.
Posted by Creative-Type Dad at 6:00 PM 35 comments: