There I was, like any other good husband who had just taken his wife to see Lionel Richie at the Hollywood Bowl. Walking down the corridor alongside a massive crowd of millions just after the show ended, humming to the tune “brick house” still stuck in my head. Then I see this: 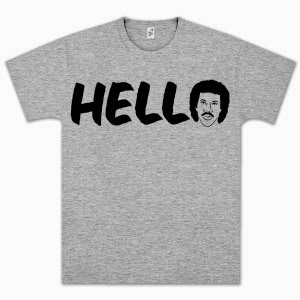 Hello? The linework. The “Hello” Quote. The emphais of the signature moustache from 80’s Lionel. This is the artwork I did back in 2008 ago for a pumpkin stencil and posted here and the one that caused an internet sensation to billions around the world!

Lionel Richie is now selling it at his concerts?

Dude. Lionel. Seriously. Whoever took the artwork scaled it up badly and did a horrible reproducing it. Lionel, I would have happily sent you the original vector illustrator file and you could have wrapped the entire Hollywood Bowl with it. All I would have asked in return is a signed picture for my wife and maybe a trucker hat.
Posted by Creative-Type Dad at 12:52 PM No comments: