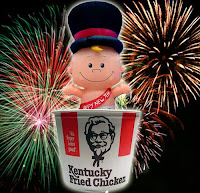 I can’t believe how fast 2007 flew by. This time last year my daughter was barely 18 months. Now she seems like an entirely different kid.
I can’t even imagine what she’s going to be like next year when she’s 3 (God, I hope she’s potty trained by then!)

The softer side of CTD:

What happens when Dad (me) didn’t read the “What to expect” books:

Weird stuff. And I don’t eve have a mustache!

Have a safe and happy new year!
Posted by Creative-Type Dad at 8:30 AM 21 comments:

Christmas Is So Much Better With Kids. And Princesses Can Ice Skate? 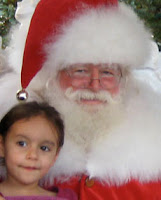 I do think Christmas is much better when a kid is around; at least it is for me. And even better now that my daughter, now nearing 2 and a half is really beginning to understand the concept of Santa.

She made cookies with the wife - chocolate chip as requested by Santa and colored him a picture. In return I… I mean ‘Santa’ left her a big sketch of Santa eating the cookies and feeding some to the reindeer with a big note that said “Thank you! Make more chocolate chips cookies next year and maybe I’ll leave a bigger gift!”

It also included a small “P.S” on the bottom that said, “Poop on the Potty and you can have Rudolf.”

Gifts! Gifts! What did everybody get from Santa?

The wife got an iPhone from Santa since she’s been envious of his since he got it. My daughter got a “Fisher-Price Kid Tough Digital Camera” primarily because she always wants to use his expensive Canon camera and is always nervous when she just looks at it.

She absolutely LOVES her new camera and hasn’t put it down all day. The wife and I are quite entertained by her pictures (hmm... I’ve never considering taking 12 pictures of the ceiling fan or 30 of my feet…)
I’m thinking of setting up her own Photo Blog and maybe calling it “The Unknown World of Those Under 37 Inches” or “What Happens When You Give a 2-Year Old a Camera Project.” 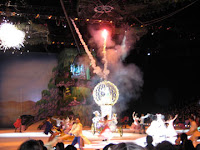 We took my daughter to the Disney Princesses on Ice show Friday night – she loved it.
The last “On Ice” show I’ve been to was “Sesame Street on Ice” back in the late 70’s. All I remember was a huge Grover on skates, a disco ball, and an uncomfortably large Cookie Monster.

This show was a much better experience, except for the $6 crackcorn… or ‘Popcorn’, $10 cotton candy, or the $20 spinning light toys.
The only unsettling part of the show was when prince Eric and Ariel were doing a skate duet -- he picked her up by the legs and spun her with her head disturbingly close to the ice.
All of the parents covered their kids’ eyes as if they were about to have sex. 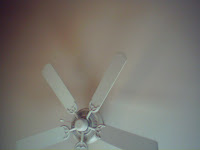 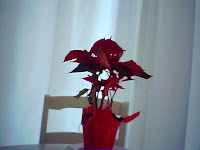 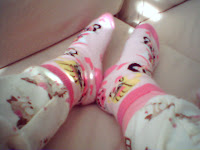 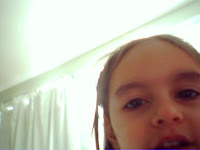 Merry Christmas: I hope you and your family had a great Holiday!
Posted by Creative-Type Dad at 7:30 PM 41 comments:

Back from Disney World…I Need a Vacation! 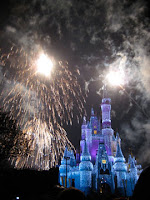 When I finally rested my head on my own pillow at 2 am last night, I reflected on the last 7 days:

Things I didn’t enjoy:
-Spending about $50 on popcorn because my daughter became addicted to the stuff like it was crack.
-Dodging and getting hit by “extremely overweight people” on those little rascal motor scooters!
-Florida weather turning on us: 55 daytime high, 39 nighttime low in the middle of our vacation!! (what gives?!)

A few things I’m going to remember forever:
-My daughter asking for popcorn at every popcorn cart -“I want popcorn” in a low-voice, over and over again. I counted 48 one time.
-Eating lunch in “the castle” with the Princesses at Cinderella’s Royal Table. My daughter loved this.
-Flying 800,000 miles to Disney World from L.A. and what’s my daughter’s favorite ride? The playground.
-Daughter falling asleep at the Epcot Candlelight Procession during the trumpet blowing part, and then waking up suddenly afterwards when somebody dropped their drink.
-My daughter bumping her head at the Epcot’s Canada pavilion, then saying in tears “Daddy! I bump my head on Canada!!”

And for those who are thinking of going, some recommendations (of course they all have to do with food…):
Teppan Edo (Japanese Restaurant) at Epcot. I’ve been to Japan and I never saw any cooktop show this fancy.
Le Cellier (Canadian Restaurant) at Epcot. Oh. My. God. This was the BEST steak I’ve ever had. You Canadians sure know how to make meat! If you all eat like this, I’m moving.
Boma (Animal Kingdom Lodge) Oddly enough, this was a buffet. I usually HATE buffets, but the food was awesome – Exotic African foods from, I think, 6 or 50 countries...
Spirit of Aloha Dinner Show (Polynesian Resort) Nothing against Kauai, but this show was better than the crap we saw out there. And the fire guy must have been on drugs because I swear he practically lit himself on fire. And the food was pretty good too - especially the BBQ pork ribs.
California Grill (Contemporary Resort) On the fence with this one -- the view is amazing and the service was great. And they were especially accommodating for a toddler -- when our bread came out, they brought her Goldfish crackers on a fancy dish. And her 4-cheese pizza was tasty. The big downside are the prices.

Potty Training Update: Don’t Do It At Disney World…
God knows I tried...
1st attempt -- We were waiting in line to see Goofy and he had to leave for 5 minutes (we were told to get Hot Cocoa, in reality to switch people.) I told my daughter Goofy had to go poopy on the potty.
She told me Santa was bringing him presents.

2nd attempt -- During the Princess lunch, the wife took her to use the Royal Restroom (yes, they have them in the castle.) I told my daughter that’s were all the Princesses go poopy on the potty.
She came back and said she didn't see any in there. Apparently, she went looking under the stalls.

3rd attempt -- We were waiting in line to see Pluto and he had to leave for a 5 minute break. I told my daughter Pluto had to go poopy on the potty.
She told me “NO, doggies go poopy on the floor!!!” 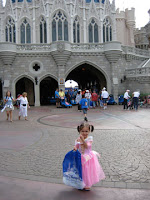 What To Do When A Child Stops Believing In Santa?! And Kids Birthday Parties Marathon

Yes I know I haven’t posted in awhile but between getting ready for Christmas, prepping for our Disney World vacation in two days, and the 5 birthday parties (3 in one day!) we’ve been to in the last week alone -- their isn’t much time for anything else.

The most interesting birthday party of the bunch was a Scooby Doo themed one in "the hills" with a Scooby and Shaggy impersonator.

During their whole comedy routine about 99% of the parents (entertainment-types) were standing in a nearby tennis court networking while this one mom and I were sitting near our scared kids. They were pretty frightened of the Scooby Doo -- I think maybe because his costume looked like it had a rough night in Tijuana, or maybe because he was holding his tail like a baton and would start hitting kids on the head with it.
When he came close to my daughter she jumped up, screamed and ran away into the crowd of schmoozing parents.

The best part was hearing these two sugared-out kids talk to Scooby:

Scooby: (in a Brooklyn accent) Leave me alone kid.

My patent-pending Santa Motivation Method (code named: S.M.M.) is starting to lose steam. I’m not sure where I went wrong, but my daughter doesn’t seem to care anymore about Santa bringing her presents on Christmas by going poop on the potty (Darn! A kid stopped believing – what do I do!? What do I do…!?)

In desperation, I made it a point to pass by Santa Claus in the mall today. Standing near the flimsy cardboard fence I knelt down to her level, and in a calm voice gave my recurring line “Remember, Santa only gives presents if you do poopy on the potty…all the time”

She looked at me, and then him. I could tell the wheels were turning (Come on, come one…take the bait...)
She looked me straight in the eyes and excitedly said, “That’s O.K., Santa bringing YOU lots of PRESENTS!!”
Posted by Creative-Type Dad at 8:30 PM 33 comments: