Potty Training Success! And Speaking of Poop, “The Oscars”

Guess what? I have a nearly potty-trained 2 and a half-year-old. That’s right, and it only took a little over a year - well, if you count my first attempt at 18-months.
Yes, I know there are some that can potty train a 3-month old; it’s not like I haven’t gotten the emails, comments, etc. with statements like “it’s easy! I did it and BILLIONS have too, just buy my book...” I’m sure they have and God bless them for it. But as I soon found out, kids come in all kinds of varieties and you just have to adjust the training based on their personality.

For instance, some toddlers don’t want Elmo to cry every time they go poop in their pants; in my daughter’s case, she wanted to see Elmo cry. Which makes me wonder a little….

And then I give her money for her piggy bank. The wife taught her what money is and to ask me for it. Which reminds me, I still have to thank her for that…

We did get some “scares” - one day she didn’t do anything for nearly 7 hours; that was a little creepy. She kept asking for a diaper and I stuck to my guns and kept refusing. I thought she was going to explode given all the gas she was passing. I kept trying to avoid her backside just in case anything came shooting out like a bullet… maybe leaving a hole in the wall with a view of the backyard.

She eventually pooped. When I picked her up, I swear she had lost about 9 pounds.

Did anybody watch the Oscars?

I still can't believe “No Country for Old Men” won Best Picture. Talk about a HUGE disappointment. A good premise, build-up, and good performances (Javier Bardem – great!) and then completely ruined by a stupid ending that made absolutely no sense. I had to skip back on our screener and watch it again because the wife and I thought we missed something.

My advice if you see the movie, walk out or turn it off 10 minutes before it ends (when Josh Brolin drives into the motel.) If not, be prepared to get an explanation by somebody who “read the book.”
Apparently, the requirement is to have read the book to enjoy their movies now.

I recommend the other MUCH better films such as The Diving Bell and the Butterfly, Juno, or Away from Her.

Now it's time to put Sleeping Booty to bed and open some windows...
Posted by Creative-Type Dad at 12:01 AM 37 comments:

Email ThisBlogThis!Share to TwitterShare to FacebookShare to Pinterest
Labels: Away from Her, Juno, No Country for Old Men, Oscars, Potty Training, The Diving Bell and the Butterfly, Toddler

A Message to Toddlers: Nose Picking Is Very Unpatriotic!

Can somebody please tell me why toddlers are so obsessed with picking their nose? Because I’ve been trying to figure it out since my daughter mysteriously figured out she can shove her fingers up there at the most undesirable times, like when I’m eating pea soup or guacamole.

And trust me, this is not good dining entertainment.

So far, I’ve come up with a few theories that might have caused this behavior:

Now I’m not on a mission to stop this behavior.

The wife has her own methods to stop the digging – which is just to gently move her hand and telling her to stop. I’ve taken it a step further, reinforcing my parenting technique of giving an explanation of consequences along with the discipline.

What to tell a nose picking toddler:
And to help the cause, here’s a nose picking coloring page. Because everybody knows kids learn better when they color pictures of animals. 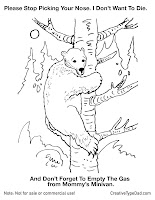 Please Stop Picking Your Nose. I Don’t Want To Die.
And Don’t Forget To Empty The Gas from Mommy’s Minivan.
Posted by Creative-Type Dad at 12:15 AM 51 comments: 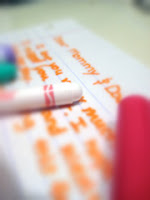 For some odd reason I’ve had that Spiderman theme song stuck in my head since Saturday. It’s REALLY starting to bother me.

(Spiderman, Spiderman…does whatever a spider can…)

I’m curious, so how many of you parents do “date nights”? You know, a real one where you get a sitter and run out the door for a few hours and go somewhere childfree that doesn't rhyme with Chuck E. Cheese.

In the 2 and half years since our daughter was born, the wife and I haven’t done a real "date night." I’m pretty sure Dr. Phil would call this behavior extremely unhealthy and then camp out in front of my house yelling through a bullhorn. But who cares, the guy is a quack. But now the wife and I are beginning to think this is a good idea to try at least once a month.
On Friday we went to see Wicked The Musical, which by the way was O.K. Not great like all the hype would have you believe, but overall entertaining. Without spoiling it, I thought the ending was borderline cheesy. Although, I must say the ‘Wicked Witch’ main girl did have an amazing voice; to be honest I wish she had sung more. I think that would have made it even better.

Anyhow, when we got back home my daughter had the sitter write the wife and I a letter. This is what it said:

I hope you had fun tonight without me. Alexis and I had fun. I love you both very much, even though you left me.
I made art for you and left it on the refrigerator [sitter: in case you’re wondering, the tears made the markers smear.]

Your daughter,
Sunshine Sparkles
(My new name)
XOXOXO
P.S. Captain Hippo was playing in your closet.

(...Catches thieves, just like flies...Look out! Here comes the Spiderman.)
I hope he catches that criminal, Captain Hippo, soon…
Posted by Creative-Type Dad at 12:00 AM 40 comments: 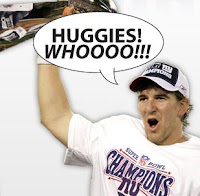 Even though I vote, I don’t like politics. I see it as a necessary evil, kind of like Tom Cruise – he’s annoying but most of his movies are entertaining.
The speeches, listening to NPR, watching the ‘live’ news coverage last night just keeps reiterating that it’s all just a big obnoxious show.

One of these days I want to start my own country. Maybe an island somewhere in the South Pacific where I can just name myself King (wearing Ray-Bans, big gold chains, velour tracksuit, white sneakers) and I could cut a deal with KFC to provide my people with Spicy Chicken and free health care. And the big export would be $8 bottled water with some cool name like “Sexy POW-AH Energy Water” that prevents hair loss, promotes weight loss, cures erectile dysfunction, and is loaded with anti-oxidants from Acai that prevents aging and car accidents.
I would have best county on Earth.

Disclosure:
Before you all start thinking I’m smashing beer cans on my head now and watching Football rest assured, I am not. Football still makes no sense to me.

This was a party with entertainment industry-types and the purpose was to smooze, drink food and wine that we all couldn’t pronounce, and watch commercials.
And yes, in case you’re wondering I did bring a bucket of KFC.

I was chatting with some fellow parents about this horrible experience called Potty Training. Giving them a rundown of my failed attempts, pleading and asking for advice, secrets, and voodoo, whatever it takes to make a child use the toilet.
The advice rolled in:

Mom #1: We didn’t start until my son was 4. It was just too much trouble.
Mom #2: Don’t sweat it. She’ll let you know when she’s ready. My daughter started kindergarten and is still wearing a Pull-Up.
Dad/Mom: Our son is 7 years old and he still wears a Pull-Up. No big deal. Some others kids in his class still wear them – it’s normal.

Started at 4? Kindergarten? 7 year olds 'still' wearing Pull-Ups?!?! Are you kidding me!? Parents? Please tell me this isn’t true. And if it is – lie to me. Lie like you’ve never lied before.

I had a dream where my daughter was about to take her wedding pictures; she quickly stopped in her tracks and then asked my wife to change her Pull-Up. I woke up screaming in a cold sweat...
Posted by Creative-Type Dad at 12:00 PM 43 comments:

Now I Know What Willis Was "talkin' bout"...

I find it odd what people search for on the internet. I find it even more odd that some of these searches end up here. Here are some recent ones with added commentary:

does michael bolton own starbucks? -- Yes!
what's wrong with my toddler? -- He/she's probably broken. If you still have the receipt - take him/her back...you still might get store credit.
tony danza's meatballs -– There are some truly disgusting people out there.
is chef boyardee meat real? – Depends on your definition of "real"?
i drank my wife's breast milk yesterday – Why is it these searches always come from Malaysia? Ohio I can expect, but Malaysia?
creative way to tell husband that you are expecting –- Tell him you were impregnated by aliens
my name is poop – Ok...
do truck drivers wear diapers – Yes!
is chuck e cheese ok for 2 year olds? Yes! It’s just not O.K. for adults.
wierdest thig about lionel ritchie -- the mustache. And he dances on the ceiling.
peeing through an ice cream cone -- I've never tried... 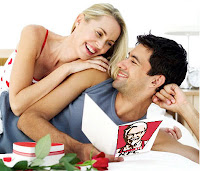 I was once told that on Valentines day, the Japanese forgo expensive restaurants, flowers, chocolate, jewelry, talking, etc. and just stop by the local KFC on the way home before turning on the Barry White Greatest Hits CD and filling the bathtub with Jell-O.
When I first heard that story, I couldn’t help to think, “now that’s a tradition worth starting in this country.” And because Jell-O’s involved, I’m sure our friends up in Canada wouldn’t mind joining in the festivities too.

Here's something to help kick-off this centuries old Japanese tradition: