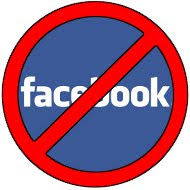 Call it peer pressure, sheer curiosity, interest in the latest internet fad, or just wanting to stop those annoying emails of people wanting me to join Facebook; I finally bit the bullet and joined with my real name.

And then yesterday I determined that I’ve had enough and terminated my account.

I quickly came to the conclusion that I really don’t want an “update” when somebody is tired, tried a new food, hates their boss, met up with friends, hungry, kid has diarrhea, or when the dog just threw-up again. I don’t want to know everything they’re a fan of or when they just used crop fertilizer – it all just get annoying.
And there are just some things people say/update/post about that I REALLY don’t want to know about.

Besides I really don’t like the fact that it’s become an excuse to not email or pick up a phone and call real friends because posting on Facebook is suppose to be the same thing. I don’t find it the same. Call me old-school but I would much rather see my friends in person once in awhile, email, or even talk to them on this archaic device called a phone.
And texting really doesn’t count. I still don’t understand the whole dictionary of acronyms lingo. Although, I am a big fan of OMG and WTF.
Most of the time I find myself using an online texting dictionary trying to figure out what those stupid things mean anyway. I feel like freakin’ Indiana Jones in the Temple of Doom.

Why can’t kids (and adults) use normal words, even with their phones have regular keyboards?! WTF people! Use words!!

I find it extremely annoying that technology has made people more impersonal and text in hieroglyphics to communicate with each other even when they’re in the same room.

In 100 years from now human mouths will evolve to just eat (stuff like delicious KFC) and not speak - all thanks to Facebook.
Posted by Creative-Type Dad at 10:45 PM

This is your friendly neighbourhood asshole. In the paragraph where you berate humankind for using text abbreviations, you use one yourself (WTF).

I hate text speak except WTF because it is so universally known I can actually say Double You Tee Eff in the grocery store, everyone knows what I mean and I haven't used any bad words.

My particular loathed text word is 'gurl' for girl. What is the point of that? Is the I more challenging to type than the U?

What I don 't like about FB are those silly games, polls, quizes and tags etc.

i like Facebook, to an extent. I agree with Amrita and really wish I didn't have to see any of that (I do manage to block a lot of those updates) and I do hate when people post mundane things CONSTANTLY. If it's a Tuesday I assume you are at work. Don't post that you're at work. If it's noon I'm assuming lunch is order. Don't post about it. But it has helped me reconnect with some long lost friends, and keep in better contact with others. I also really like how easy it is to share pictures.

for a different kind of girl said...

I have a Twitter and Facebook account, and I use them both, but I do think they are capable of sucking the creativity out of life. When I log into my Facebook and see my friends doing nothing but updating with their various quiz or game info, though, I log off pretty fast.

SciFi Dad -- I know. It was meant to be ironic. Those two acronyms are the only ones I use, I swear.

for a different kind of girl -- the quiz and game updating is the most annoying. It's just ridiculous.
Although I do miss playing Farmville and Pet Society. I'm thinking of rejoining as an 80-year old bee farmer from Norway with no friends. That way I wouldn't annoy anybody with those updates.

They say if you give enough monkeys typewriters and enough time, one of them will write Hamlet. Thanks to Facebook, we know this isn't true!

Really, that was paraphrased from a quote I saw about 12 years ago about America OnLine. The ubiquitous and seemingly immortal AOL, LOL. :-)

The "misspelled" full words really are shortened sentences. Rather than be descriptive and verbose by using that lost piece of grammar affectionately known as the adjective, they shorten it down to a misspelled and mispronounced word.

However, when I look back and read things like the Declaration of Independence, I wonder if Thomas Jefferson would say the same thing about my writing that say about today's text/chat/facebook/twitter?

If another person requests me for their mafia wars i am going to spit fire.

A coworker just un-friended another coworker who sent around pics from the first coworker's FB page - nothing inappropriate, just previous Halloween costumes. But it's the perfect example of people not thinking about what they're posting.

I was having my blog posts automatically shown there, but I now am connected to so many work people that I decided it might be a bad idea for them to see me posting about poop all the time.

I use Facebook for blogging purposes and to keep in touch with aquaintences (not real friends). That being said...A friend of a friend died not too long ago and it creeped me out that people were writing on his wall after he died. Sure some people were writing it as a way to say goodbye but some were actually "checking in" to see how he was doing

I have two facebook accounts one for the "real me" where I keep in touch with friends, share pics, etc. The other one I use for games...and really, Farm Town...so two months ago! It's all about Yoville dude!

Sasparilla Sue -- I did end up creating a "fake-name" Facebook page just to play Farmville, Poker, and Pet Society. BUT I deny all friend requests because my front is that I'm an angry Norwegian - especially when it comes to Farming!

WILLIAM -- That is creepy. I wonder if Facebook will just end up becoming a memorial or if they clear their databases after awhile.

nonlineargirl -- At least they know your kids are good with the Fiber intake.

Bennie - I think there's a 14-year old girl trapped inside you.

About shortening words when sending texts, I think the original purpose had to do with having a limited number of characters available. If I need to go past 150 characters, I'll suck it up and change "you" to, sigh, "u". But in an actual email? No.

What if you are already socially-awkward and hate using the phone or the only free time you have is late at night when you cannot call anyone because they too are just settling down after getting their kids to bed? Then F'book and twitter are perfect, right?

I did the same thing CTD...okay, if I refer to you as CTD, CTD? Started on facebook after being informed that even one of my brothers and my 83 year old uncle was using it. Had considered it before just to find out what happened to some high school and college friends. Couldn't care any less as to what mood someone 2 miles down the road is in today. The virtual farming, flowers, lost kittens (oops, may have hit a vein there), and 'what type of eating utensil are you' quizes are extremely annoying! I do txt but it doesn't replace phone calls and personal visits....great silent means of communication! I'm very old school (some may say a prude) I despise the F word so you won't catch me using the WTF BTW!!!

So then you're uh, not going to join Twitter, huh?

ArtistUnplugged -- Don't get me started on how many people left city life for the farming life updates...

I use Facebook, but I try to limit my contacts to like-minded (I'd say right-minded) individuals who use it to complement in-person communication, not mutate or replace it.

LOL at the first comment. (And yes; that's intentional. I HATE LOL.)

What I really hate is when it's so accepted as a shorthand non-word that it changes to where it doesn't even make sense if you "translate" it. I've seen LOLOL more and more lately. What the...? Laughing out loud .. out loud? And you're probably not laughing.

My absolute least favorite is "u" for "you" and its cousin, "ur." Blech.

I have still not tried facebook. I am somewhat proud of my old school ways although I might cave some day. I will never use the acronyms though. I refuse to do it. I can still laugh out loud if you will.

@Crazy Computer Dad
It appears to me that you're not very well educated when it comes to history, particularly that of Mr. Thomas Jefferson. Mr. Jefferson and many other scholars of the age would use text abbreviations such as "yr" for your and "P.S." for please. These men were highly educated and yet they have done what such controlling persons as yourself. And it has become apparent to one who observes your highly fallacious statements that you are just someone you "hates". People like Jefferson used such abbreviations to cut down on the length of a letter which at the time was very expensive. That was just a little FYI. TTFN :P