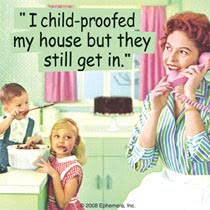 It wasn’t until this past Easter weekend when my 11-month old son started getting into the trash, pulling over chairs, and pretty much anything else that’s about 24 inches from the floor that I realized I’ve gotten pretty laid-back about “babyproofing” the house.

My wife and I are nowhere as scared with the second kid as we were with the first. With our daughter we pretty much babyproofed 99.9% of the house with about every gadget or contraption possible that placed panic or fear on us. It’s hard to believe that at one time, it was possible to run through our house, with shiny scissors, drunk, on fire, and not get hurt.

Yes, those were the days where we would take some serious trips to the local “Baby’s R Us” and head straight for the new parent “fear-gear” aisle and pretty much fill the cart with gadgets, padding, industrial-grade airbags, and Houdini locks worried that if we didn’t cover every corner of the house…. the refrigerator might somehow get accidentally pulled over and kill the entire neighborhood.

How were we to know? The packages they came in or some article we read might of sited some study that proved “million’s of baby’s” were tragically killed from falling refrigerators on the Fourth of July.

It wasn’t until we gained experience with our first and couldn’t open anything ourselves for actual use or enjoyment, and looked like we ran a padded home for crazy people, that we realize how truly stupid those things were.

Now a bit wiser in the ways of parenthood, I realize now that there’s only really one true way to babyproof a house: 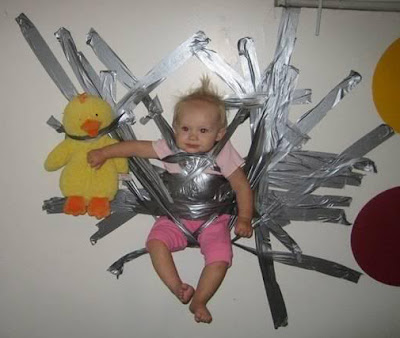 Use lots of duct tape.

once you have more than one kid it is impossible to baby proof a house. My older kids are constantly leaving stuff out for my youngest to get into. The older two never knew what a sharpie was but my youngest is a pro at using them.

i think it depends a lot on the kid. my kid was into EVERYTHING, while I had friends whose kids never opened a cupboard, and couldn't understand why I had to move the fish food and tank chemicals up out of toddler reach every time I visited.

then they had their third child, intrepid like my only.

They called to say "wow, we get it now"

Makes me think of the childproof caps on medicine bottles, and the fact that these make it impossible for people with arthritis to be able to take their medication!

When I got my cable TV recently, the parental controls were pre-set, and I had to get the password to remove them!

Manufacturers forget the millions of people who don't have children, thus don't need parental controls--and especially childproof caps. And particularly with the childproof caps--this can be potentially deadly. Consumers should have a choice between childproof and non-childproof.

It's funny how the second is so different....do you think the family with 19 and counting even acknowledged any after, say about, five? Guess that's why they have to keep counting. Stay healthy, happy belated birthday to you!

That picture is priceless!!

I love this! I just saw that duct tape now comes in patterns (like leopard print)- that can take child-proofing to a whole new level.

Sarah -- in patterns? Wow, that's a great idea. The possibilities...